The Evolution of Lefty Espi 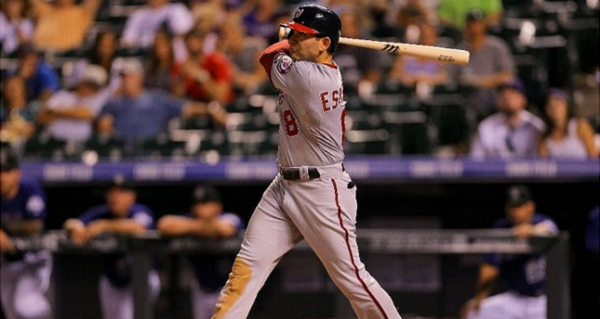 Danny Espinosa has really been a pleasant surprise this season. Besides being his typical great defensive self, he’s third on the team in OPS at .773 and (a very distant) second in HRs with 6. His OPS is 6th among NL 2Bs, and if you add in the shortstops, it’s 10th among middle infielders in the NL.

More importantly, he’s filled in for an injured Anthony Rendon well enough that the Nats haven’t spent the last two months scrambling to try to get a replacement that could even approach replacement level, like had to do with their 2013 outfield.

He continues to maul LHPs, as he’s always done (.813 career OPS vs LHP). Albeit in only 30 PAs, he’s got an OPS over 1.000 against them. If the Nats face a lefty, he should start over pretty much anyone on the team. But that’s not why we’re here.

Another surprise this season was when his move to try to be a right handed-only hitter lasted all of zero regular season at bats. He first played on April 11th, starting against a lefty (Espi platoon!) and all seemed normal until Cole Hamels exited, and Espi faced a righty, from the left side. He said he wasn’t comfortable hitting right on right, so he returned, after a pretty bad spring training, to switch hitting.

But he didn’t return as the exact same hitter from the left side. He shortened up his swing, and it’s made a difference. A guy who has an OPS under .650 against righties before this season is, despite a recent slump, hitting .217/.317/.404 against them. That is basically just what you would have hoped for from him in a best-case scenario – low AVG, good OBP, and an ISO that keeps his SLG above .400. An OPS over .700 from the left side is good enough for him, approaching .725 is great.

The AVG will probably even improve somewhat, assuming he hasn’t lost his improved LH swing. The way he played for the first 7 or 8 weeks of the season suggest he can bring that back up. One reason is that he is making more contact. Look at his whiff per swing rate from 2013-2014, against RHPs: 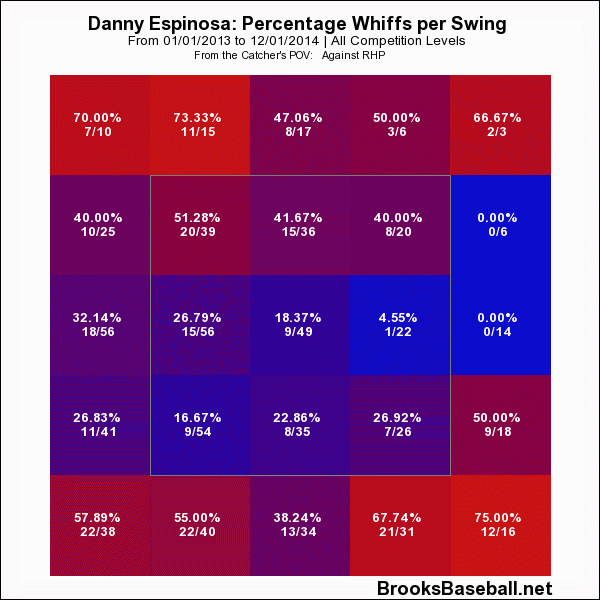 Obviously, there’s some swings and misses outside the zone, but he’s got most of the plate covered. But look at this season:

That’s alot more blue, which, in the case of the particular heat map, is a good thing. He is making contact with balls in the zone, even in the upper part of the zone, at much better rates. He’s still missing below the zone, but not as much above it. My suspicion is this is directly due to a shorter swing – he is still missing low when he gets fooled by breaking pitches, which pitchers try to keep down. But his new swing allows him to catch up with fastballs, which are often thrown above the zone to get guys to chase.

But there’s more to it than just a shorter swing. Taking a step back from swings and misses, let’s just look at swings per pitch from the left side in 2013 and 2014, when he was awful as a lefty. 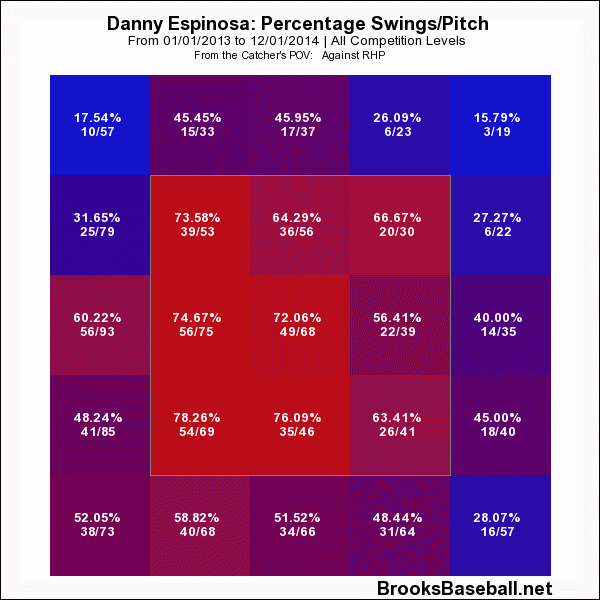 Alright, that shows he was swinging mostly at pitches in the zone. So what, right? Well, let’s take a look at what he’s done this year. 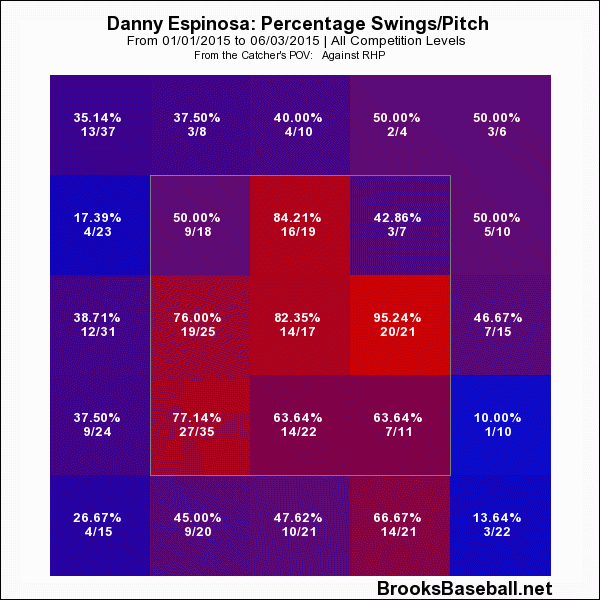 Again, that’s a clear difference. He has really cut down on chasing pitches outside of the zone. He’s still swinging at low stuff over the middle, but most hitters do, and he’s not chasing the low and off the plate stuff much at all. He’s also not swinging at as much stuff away, even if it’s in the zone. Perhaps he’s looking more inside – trying to lock in on an area where he thinks he can hit, or where he thinks the pitch may be, and laying off more stuff if it’s not.

All of these come together to bring down his strikeout rate. Espi is always gonna strike out, both because of who he is, and how baseball in 2015 works. But his career rate K/PA rate prior to 2015 was 30% and it’s dropped by about 1/3 down to 21%. It will be interesting to see how sustainable this is. I have a feeling that if he can keep this rate low, it’s a reflection of his ability to swing mostly at strikes instead of balls, and to make more contact. More contact with better pitches should, unsurprisingly, result better overall numbers.