Nats Trade for Their Second Baseman 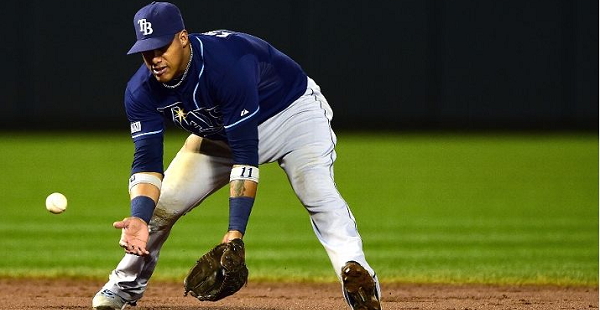 The Nats just made a pretty big trade, giving up bullpen mainstay Tyler Clippard in exchange for a shortstop, Yunel Escobar. Clippard is on his last season before becoming a free agent, and is set to make upwards of $9 M to be used as a setup man. Escobar is owed $5 M this year, and $7 M next season. His contract runs one more year, through the end of 2017, for another $7 M, but there’s a $1 M club options.

This gives the Nats “Ian Desmond Insurance” – at the very least they probably won’t feel backed into a corner at the end of next year and throw him more money than he deserves. Desmond is going to get a ton of years and a lot of money to be a shortstop on the wrong side of 30. History is against him, so, to quote Mike Ferrin “I’m a big fan of Desmond. Not a big fan of extending him.”

It allows the Nats time before Trea Turner is ready, and more options if he turns out to be a 2B. At this point, I think the Nats are more likely to play Escobar at 2B and keep Desmond at SS, for 2015. But maybe someone will blow them away with an offer… Anyway, enough of what you know, let’s dig into these guys.

The Get – Yunel Escobar 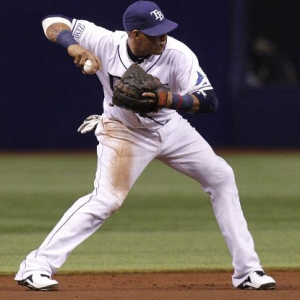 Escobar is a shortstop that will most likely move to 2B, so let’s talk about his defense. He is 3 years older than Desmond, so we have to have the same decline issues as we do with future Desi. Of course, if Desmond would sign a 5 year contract extension right now, ending at his age 34 season, I bet the Nats would do it. Especially if it was really equivalent to Yunel’s and was only $7M a year and ended with a $1M club option.

So, this declining defense – the numbers suggest it’s true. Last year was bad, although defensive metrics are notoriously fickle year to year, so some better numbers would be expected this year. Eno Sarris has a great profile of his defense on fangraphs, that I suggest you read, but here are the highlights

he’s very sure-handed. Even including his bad year, Escobar has been top-five in making the Routine plays since 2011 as determined by Inside Edge. He’s been the best shortstop since 2011 at making the Likely plays, too. A shortstop that makes 96.6% of the routine and likely plays is valuable no matter his range

He then goes on to skewer his range. Which is why it seems likely to me that the Nats want him at 2B. A surehanded middle infielder with more limited range could work well there. And if his range is really bad, they may even consider moving Anthony Rendon back to 2B and putting Escobar at 3B, although that’s probably a longshot.

If his defense looks better at 2B (probable) and his bat looks better in the NL (possible) then he’s probably a solid, average 2B in the league, leaning towards the top end. If his bat stays the same, he’s probably still in that middle cohort of 2Bs, but towards the lower end. In other words, it’s alot better than what they have now.

What they Gave – Tyler Clippard

Giving up Clippard makes a ton more sense from a statistical standpoint than from an emotional one. He’s been a stellar reliever, but WAR is not kind to relievers. He was a 0.4 fWAR player in 2013, 1.5 in 2014. But BP projects his value to be 1.3 WARP next year, just a tick below Escobar’s.

From a value perspective, the Nats are trading up even WAR (getting a slight advantage) in year 1, and then getting another year, possibly two. And it fills in a position of need in place of a position where they have many options. So it makes quite a bit of sense.

It’s tough to see that, though, when you think of just how damn reliable Clippard has been. Over the last 5 seasons, he’s averaged 79 IP, 91 K and 29 BB, with a 2.63 ERA. He’s been like a true setup man, an extra closer that doesn’t close, for the most part, only getting more than a single save in one of those seasons (2012 where he had 32).

But let’s not get carried away. Over the last three seasons, his ERA has ranked 47th among relievers, his xFIP 117th, his K/9 41st and his BB/9 92nd. In other words – he’s been very very good, but not elite. His value has been his reliability and consistency. And there’s a ton of value in that, but it’s not irreplaceable.

Rizzo obviously sees their other options in a crowded bullpen – guys like Matt Thornton, Craig Stammen, Aaron Barrett, Jerry Blevins and Erik Davis, among others. I wonder if the addition of Thornton, as well as the emergence of Blake Treinen, that made them so comfortable making this move. Either way, Nats fans will miss the confidence they felt when those goggles took the mound, even if they might not see much of a difference in overall results

Numbers-wise, the Nats seem to be “winners” in this deal, although the A’s also did well to trade a position of strength to get something they needed. But Washington loses a guy that the media and teammates and fans loved, who was a major part of this team since it’s moved here. That doesn’t really bother me, because I have trouble imagining them keeping him after next year. Since it’s just doing it a year early, so be it.

Escobar, on the other hand, also comes with some history, and it is not so good. The incident I refer to is when he wore eye black that had a slur written on them. It was an unacceptable thing to do, and is not something that is easy to forgive. He was not a kid at the time, and should have known better.

Some of it might be chalked up to cultural ignorance, and the way it might be interpreted in his native Cuba. If you want some thoughts on why he didn’t think he was doing anything wrong, a quick google search brings up some of the more local (Toronto at the time) coverage, which gave a few insights (or you can call them excuses, if that’s your wont):

None of this excuses what he did, nor should it. Forget about the homophobic part about it, we’ve hopefully moved past it being acceptable for a male athlete to be called a girl for bad performance. So let’s not write this off as nothing.

But it also sheds some light as to why he might have done it. It’s entirely conceivable that it was meant just like he later said – he was lashing out at critics with an insult that Latin players use constantly, and thought nothing more of it.

There was also talk of makeup issues back in 2010 when he left Atlanta. In 2014 it would probably be compared with a fellow countryman, Yasiel Puig – some would take it at face value, others would question if it really was all on his end. (This article by Aaron Gleeman questioned it at the time). And when the Rays acquired him, they found him to be considered “a great teammate” rather than the clubhouse poison they were expecting.

So, is he a bad guy who showed what kind of person he really is with that move? Or is he a good guy from a different cultural background who made a legitimate mistake based on a cultural divide and is truly sorry for his mistake?

I don’t know. You probably don’t either. The only thing I’m willing to say is that I don’t like what he said, it’s unacceptable, and I hope he’s truly sorry and understands what was wrong about it. But, I’m not willing to judge him as a bad guy at this point. I’ll keep in mind what he did, but I’m hoping the beat reporters will try to give us a better idea of what kind of man he really is.

The downgrade in the clubhouse that many fans are feeling aside, this trade was good for the Nats. They trade one year of a reliever for three years of a middle infielder. They need a second baseman, and they got one. He’s a league average guy, likely better than Asdrubal Cabrera, and he should help them return to the playoffs. Although, they should be good enough to get there with or without him.

It also gives them flexibility with middle infield at a serious bargain. He’s a sure-handed MI that can hit enough and, after this season, they could end up only owing him $8 M if they wanted to part ways. He allows them to deal with Desmond in whatever way they choose. And if, by some miracle Danny Espinosa takes to being only a right handed hitter and becomes something close to a league average middle infield hitter, they can move him to SS and keep Yunel at 2B in 2016.

It’s a good deal for the Nats, who need options besides feeling they are forced to sign a 30 year old shortstop, considering how little success players at that positions have had over the last decade.