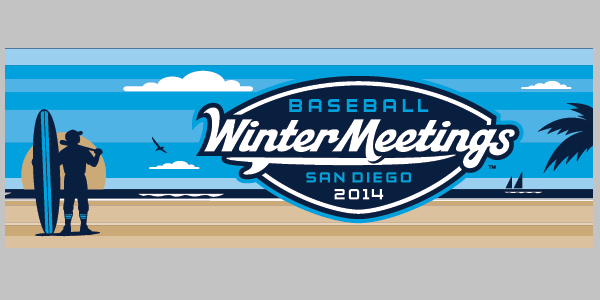 The MLB winter meetings are about to begin, and they could be really busy this year. This isn’t just true for the league as a whole, it’s very likely that the Nats will be making some moves this coming week. Here’s what we might see:

The Nats have a glut of starting pitching, especially when you start adding in the guys who aren’t even in the rotation but could be. While other guys may get them more in return, Jordan Zimmermann is the one that has seemed to most likely be on the block. They don’t need to move him, but his contract expires at the end of 2015, and it seems like they won’t be able to re-sign him at an affordable rate, so trading him makes more sense than probably anyone else on the staff.

The Nats could certainly move JZimm and have no issue winning the NL East. I explained it in depth, but the basic premise is this – Steamer (the only projections out right now) give him a 2.9 WAR for 2015. That’s probably a bit low, so let’s say he’s worth as much as 4 WAR. This would be the second highest of his career, behind only his 5.2 fWAR in 2014. They could sign Shields (3.0 projected WAR), Kuroda (2.6) or Ervin Santana (1.7) and not lose much from having Zimmermann, over 162 games. It wouldn’t make a big difference on their win totals.

They could also use some combination of  Ross Detwiler, AJ Cole and Blake Treinen. Statistically, it makes perfect sense when you stretch it out for 162 games. Over a 5 or 7 game playoff series, though, they might really miss Zimmermann.

If the Nats do move Zimmermann, I really don’t think they’re going to follow that move up with signing Max Scherzer, as many have suggested. Scherzer is the top free agent this season, and he’s going to get ace money. While we don’t really know how much the Nats are willing to spend, or what their salary roof might be, but I just have a feeling they aren’t willing to go crazy on a 30 year old Scherzer. They still have the MASN money issue hanging over their head, not to mention the eventual need to re-sign Strasburg and Harper.

I could see them going after a cheaper guy if the trade Zimmermann, it certainly wouldn’t surprise me. But I actually think if they trade him, they’ll just use the guys they have. It’s risky, but then again, if they get a really good return, it could be very much worthwhile.

Second Base, or… Shortstop?

The Nats are currently without a second baseman. Well, they have Danny Espinosa, but he’s shown he can’t hit righties, so they need some help there. I recently wrote extensively about how they might go about that while still using Espinosa, so one of those moves is certainly possible. And they wouldn’t need to get a 2B. They could move guys around and platoon with a 3B or a SS as well.

More likely that going after a platoon, though, is going after a guy to play second base full time. The Nats haven’t shown any interest in splitting players’ time, I think they’re more inclined to do something as uninspiring as re-signing Asdrubal Cabrera. While that wouldn’t be a horrible move, I don’t think it’s one of the better moves. Rather, they will probably first see if they could get something great for JZimm, and if that great young player could help in the middle infield. If that doesn’t work, well, I think they should consider going after Korean power hitting middle infielder Jeong-Ho Kang. Again, though, their possible lack of funding could keep that from happening.

Of course, besides Zimmermann and Doug Fister, Ian Desmond is set to end his contract after 2015. He will not be easy to replace, with the way he has hit, compared with the rest of the league’s shortstops. But, if they do end up trading a JZimm for a real stud SS, they could get some nice return for Desi as well. This is a little more far-fetched, though. If they got rid of Desi, they’d still have a hole in the middle infield to fill.

Looking at the other contracts, there aren’t too many guys that will get moved this offseason. They have a strong bullpen, and plenty of teams would probably like Tyler Clippard. He might get moved as well, but I don’t think they Nats are ready to lose him this year.

I think the most likely scenario is that the Nats end up moving Jordan Zimmermann, and sign a ho hum player to man second base, as much as I’d like to see them go after Kang.  I doubt Desmond gets moved, and I don’t think they’d seriously pursue Scherzer. It think if they do move JZimm, it would very likely happen during the winter meetings, because it almost feels like that needs to be the first move before doing anything else. If they don’t get what the want for him though, I think they’d have no problem staying put, and essentially doing nothing more than reacquiring Asdrubal.