It hasn’t been the easiest season for Denard Span. He started off the year mired in quite a hitting slump, and once Ryan Zimmerman got moved to left field, lots of people suggested that Span should be the odd man out with the outfield logjam. One of those people was Bryce Harper.

But he persisted, and has even thrived since then. He’s continued his stellar defense, hasn’t been any sort of odd man out (that was left to Espinosa), and has drastically improved on his hitting. Going to back to what wasn’t quite his low water mark, but was the last time his OPS was under .600, we see Denard was hitting a measly .234/.284/.315. Not good for a leadoff hitter, an 8th hitter or anyone other than a pitcher. 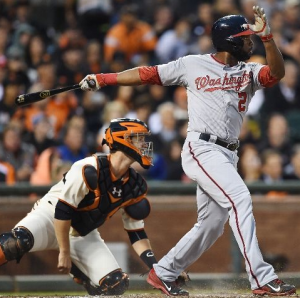 That was game 30 of the season, on May 11, and since then, he’s been one of the best leadoff hitters in the game. We just saw game 99 go by, so we’ve got over twice as many games since that point to examine.

Starting on game 31, May 12, Span has been great. Hitting .306/.357/.431 makes him almost an ideal leadoff hitter. He’s got just enough power to not make you move him lower in the order, and the OBP is near the top of the list. He’s getting on base without being devoid of power, he’s walking enough, and he’s setting the table for the guys with more power hitting behind him. How good is that OBP?

Among NL players with 275 or more PAs, that .357 would put him tied for #21 on the OBP for the season. That list includes a bunch of guys who are never going to lead off, like Tulowitzki, McCutchen, Goldschmidt, Stanton, LaRoche, and Holliday. In fact, on that list, there are only 6 guys who have hit leadoff at all this year:  Yasiel Puig, Ruben Tejada, Carlos Gomez, Seth Smith, Hunter Pence and Matt Carpenter. Gomez and Carpenter are the only ones who have done it regularly – more than 50 or so PAs.

Of course, the world doesn’t work that way. While we can compare his last 60 games with everyone else’s season, it’s just giving us an idea of how good he’s been. Over the whole season, though, he’s brought his numbers up to a very respectable .282/.333/.393. They aren’t as glowing, but that OBP is still 41st among qualified players. Again we have to acknowledge that most of these guys above him aren’t actually leadoff hitters.

Adding Dee Gordon, Charlie Blackmon, and Christian Yelich to the list of guys who actually are considered their team’s leadoff hitters, that puts Span 6th on the list in the NL. This is, by definition, middle of the pack. But when we think of where he was coming from, it’s pretty impressive. Because he started out in such a hole, he may never top the list, but if he continues this way he’ll get close.

So, despite some serious early season struggles, he actually seems to be fitting the bill quite nicely as a prototypical leadoff hitter. He’s fast, yes, and that’s nice. But more importantly, he’s been getting on base at a very high rate for the majority of this season.