The Future for Moore 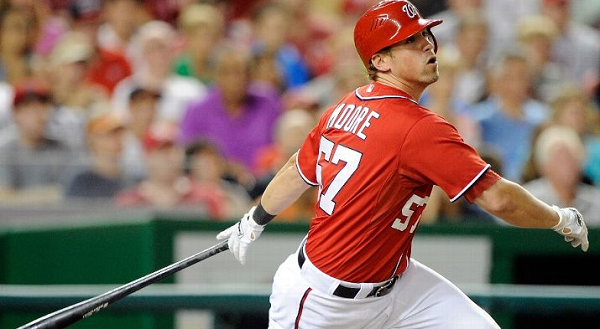 Tyler Moore is a role player on the Nats, but in many ways he is more intriguing to study than some of the starters because we really aren’t sure what he’ll be down the road. You look at his numbers and you see some things that really stand out. He’s got serious power, with 17 HRs in his first 396 MLB PAs. That’s the kind of guy that you could easily see hitting 30 HRs a season. But another number, the .291 OBP, is pretty unacceptable for a major league starter. 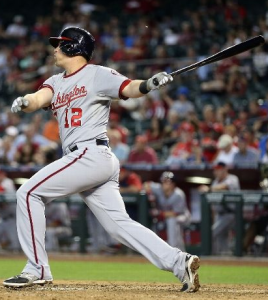 One thing is certain, besides the power, and that is that we probably haven’t seen what he really is yet. His 2012 was great – as a 25 year old rookie, he hit .263/.327/.513, not a star at first or a corner outfield position, but still really good. That’s a “second division starter”, a term people use for a guy who’s probably good enough to start in the Majors but the teams who think they are contending for a pennant are probably interested in something better.

Guys like Garrett Jones, Gaby Sanchez, and Jonny Gomes all come to mind as people who have a name that starts with G, but also as guys who fit this bill recently. They can have a really good season peppered in here and there, or have a great postseason moment, like Gomes in Game 4 of the last World Series, but they aren’t likely to make an All Star game, and most teams aren’t going to pursue them as a first option.

With the real power and the low OBP, you might expect Moore to have some serious platoon splits. I sure did. In fact, all three of the Gs I mentioned before have OPS splits over .150 points – the lefty Jones having a much bigger number. But Moore’s numbers tell a different story.

His major league career has been a series of stops and starts, and is still a relatively small sample, but he’s actually got a reverse split right now. He’s hitting .255/.305/.457 versus righties and only .220/.278/.401 versus lefties in an identical number of PAs (198 each). It is really a pretty meager sample, though – he’s got 1 more HR, 1 more double, and 7 more hits against righties than lefties. But the reverse split is there.

When we look at his minor league numbers, which are probably a bit more telling, his splits look much more normal. He has a around twice as many plate appearances versus RHP than LHP, in almost 2200 plate apperances, over 1600 of them are against righties. But like most RHH, he does better versus lefties, with a .278/.331/.530 line against them, as opposed to a .260/.317/.468 line against the opposite side.

At .076 OPS points, it’s just not a very big split. In the majors, you’d expect the difference to grow, but maybe not a huge amount. And there is power against either type of pitcher, although he definitely is better against lefties.

More troubling for his future is the low OBP. While .327 (his minor league number) isn’t bad, in order to get to that starter-value, it would probably have to remain that high. And the likelihood of that happening, transitioning to the majors, is probably low. If he was a 20 year old prospect, you’d give him a shot, but at his age, you figure he has a pretty good handle on minor league pitching, and his numbers are helped by his experience.

His strikeout numbers are also high. He has 507 Ks in 2194 PAs – that’s somewhere in the 125-150 strikeout range per season as a minor leaguer. You know that’s gotta go up in the majors, facing the best of the best, plus relief specialists.

The caveats on that, though, are that he has not gotten much consistent playing time in the majors. He did some in 2012, and in 2013, but has also only started 85 of the 160 games he’s appeared in. He’s not been given a chance to be a full time starter. What if he was?

In reality, Moore is probably somewhere in between the 2012 and 2013 Moore. There is the possibility he could really hit 30 HRs a year, and have a .300 OBP. That’s a valuable player. It’s probably still not a “first division” starter, but it is Mark Trumbo. And Mark Trumbo was traded to a bad Diamondbacks team to be their starting left fielder this year. Moore has a chance, if he can harness that power, to be close to that. Keep in mind, though, that Trumbo’s home field was one of the worst hitters parks in all of baseball – in normal circumstances Trumbo might be more of a 40 HR hitter, something that Moore probably couldn’t do.

It’s likely Moore could be a tick better with the OBP, and he isn’t gonna hit 30 HRs a year. If he’s a 25 HR guy who can manage a .315 OBP, there’s a market for that as well. It’s probably not with the Nats, though. Barring a catastrophic series of injuries, they will probably never get to see if he can repeat 2012 on a more regular basis. The best thing for Moore’s career would probably be if one of those teams saw him as a potential starter and gave him that chance.

The Nats, however, have other priorities. As a part timer and a bench bat, he has value to them. So I don’t see them shopping him around, especially not with the injuries they’ve already had. So Moore is stuck, in a way – he’s probably never going to be good enough to start full time for this team, given that they are currently a contender, but he’s too good to let go.

Hopefully he can adjust to his limited playing time and at least show off the power we know he has at some very opportune times. Jonny Gomes will never have to pay for dinner in Boston again, maybe Moore has the kind of future in DC.