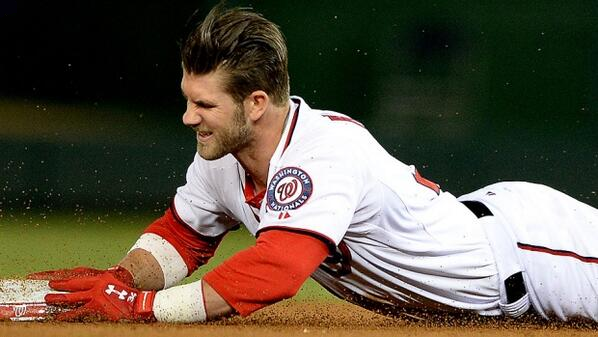 As the news of Bryce Harper‘s injury sinks in, its becoming clear that the Nats might not have one of their best players for over 2 months. He will basically be back in time for the All Star break, unless things go very quickly. But the Nats shouldn’t exactly be in a panic at this point. Yes, he’s a great player, but they are a great team without him.

If you look at the Baseball Prospectus projections, this isn’t a devastating blow. Because they project Harper to be a 1.4 WARP player this year, his loss, to them, isn’t as big as it probably seems to us, and the guys filling in for him could do enough to keep them on pace. Of course, there is a presumption that he will do better than his BP projections, because he’s a talent bigger than his age and all that. But the point is not that they’ve underestimated him… it’s that they still project the Nats to win the NL East, even with Harper adding the same value as Cody Ross, John Jaso and Lorenzo Cain did last year.

This is a talented group, and they can still take the division. They’ll need the Braves pitching staff to return to earth, which we can predict all we want, but until it happens, it hasn’t happened. But more importantly, they’ll need to play better to make up for losing a great player. Here’s where the Nats can really build up the wins over the next two months:

No two ways about it, the pitching staff needs to take the lead. The lineup is a pretty strong one (second in the NL in runs scored), and it will be even better once Zimmerman and Ramos return. But the lineup is what’s supposed to put them over the top… What gets them there in the first place is that starting pitching. This will not do

But I don’t think it will remain that way. First of all, if you look at that a couple of weeks ago their ERA would have been significantly worse. Secondly, the response by @TheNatsBlogJoe should tell you all you need to know

It’s a very good pitching staff, and over the last couple of weeks it’s looked that way. Take out Taylor Jordan‘s 5.61 ERA (which the Nats just did) and add in Doug Fister, they’ll most certainly be better. Actually, let’s do that. The remaining four SPs have an ERA of 3.50, moving them up only one spot in the NL, but putting them 1 ER away from third place, 2 ER away from second.

And the second worst ERA on the team belongs to Stephen Strasburg… who has the third best xFIP in the National League and is #4 in WAR. In other words, he’s in line for a correction, in a good way. This starting pitching staff can certainly carry the team, and it’s time for them to start doing so. But they can’t do it alone, they need help from the defense.

The team defense has been bad. They are tied for the second most errors in the league, and have the third worst defensive efficiency. Much of that is thanks to Ian Desmond, who has 8 of those errors. Take away his 8, and they’re right in the middle of the pack as a team. How realistic is it to have a SS without any errors? By my count, four starting SS have committed none so far this year, and another five have committed only one. So yeah, it’s really him that’s dragging them down.

That being said, this is old news for Desi. He has started most of his seasons looking really bad on defense, and he’s corrected it within the first month or so. It’s been just over a week since he last committed an error. That should tell you how poorly he was playing, considering he leads the league and hasn’t committed one in the 25% of the games played so far. Is this the point in the season where he gets his D shored up and commits errors at a more normal rate? Only time will tell, but it’s important, because his errors aside, they are a good defensive team.

With Rendon moved to third for the time being, they have a second baseman in Espinosa who is good enough to play SS, they have a strong defensive 1B, catcher and one of the very best in CF. This is why, going back to Baseball Prospectus, they are projected to have a FRAA of 4.5. It’s not world-beating defense, but it’s above average. In fact it’s good enough for 7th best in MLB.

The defense is good enough to be a big boost, rather than something the pitching staff has to suffer through. They just have to start playing that way. Hopefully with Desmond’s good week, it’s a sign that they will be.

Every team has injuries, it’s often who they play in place of those injured players that make the difference. Look at the 2013 Nationals – with several guys out, they had a over 2/3 of a season worth of outfield play from guys who simply couldn’t hit. Here’s a chart I pulled together last year of this Franken-LeftFielder, and how bad he was… keep in mind these were stats of these guys only playing the OF:

It’s not pretty – but chances are they aren’t going to get 400+ PAs out of a .186/.238/.282 hitting outfielder again this year. Nate McLouth hasn’t been good yet, in limited playing time, but he can hit right handed pitching. He’s a career .258/.345/.439 hitter against them, while from the other side, Kevin Frandsen is a career .288/.343/.429 hitter against lefties. Together, if used properly, they basically have numbers like what Johnny Gomes, Ian Kinsler and Jose Tabata did last year. It’s no Bryce, but it aint bad.

On top of those two, they still have Scott Hairston, who is finishing up rehab in AAA but should be ready by next weekend if all goes well. He didn’t look very good last year, but over his career he has also been a platoon-worthy lefty-masher, hitting .269/.317/.498 against them – a middling OBP but serious power. They also have Tyler Moore, who probably won’t be as bad as last year, and Steven Souza, who impressed in the minors and spring ball.

All of these guys should get a chance to hit with Bryce gone. The pool of players to draw from is much better than last season’s, and so the hope is that even if one or two falter, like in 2013, they will be able to slot another guy in who won’t. Just as long as nobody else gets hurt. Which brings us to…

Boy, if you thought the other things were out of their control… health is a tough one. As I mentioned earlier, last year they replaced good players with players who did not play well. This year, so far they have replaced good players with guys who have done well, at least in the form of Danny Espinosa and Jose Lobaton. Not so much with Taylor Jordan, but thankfully he’s got time to work it out in AAA as Fister is slated to be available.

But that’s probably the limit of the injuries they can sustain, at least until Zimmerman and Ramos get back. Another outfield, or infield injury would stretch them very thin. They’d be forced to play these bench guys, who are pretty damn good platoon players, in expanded non-platoon roles. That could be devastating.

I think the Nats are still in good shape to take the division. While they will miss Harper, and are more likely to be a worse team without him, they still have a great chance of being a very good team. I expect the story of this part of the season to turn towards the pitching staff soon enough, and they should deliver. If they lose more players to injury, though, this team could really find itself in hot water.