Teheran and his “BP Fastball” 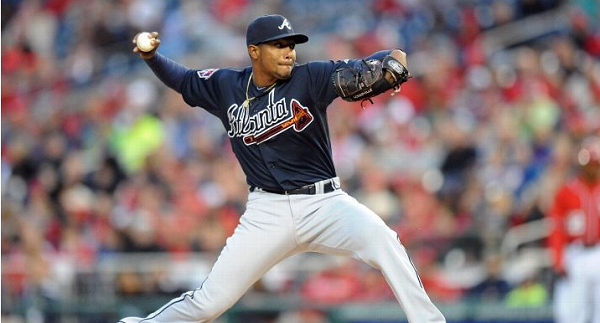 If you had the pleasure of watching Saturday’s game, you’d be forgiven if you thought you were watching the 2013 team. Between Ryan Zimmerman‘s air mail of a throw and a Stephen Strasburg post-error meltdown, it had all the trappings of last season. But I’m not going to discuss that – winning the finale of a series always makes you feel a bit better, and I’m not prepared to pass judgement on Stras or Zim at the moment.

Instead, let’s take a look at the opposing pitcher – Julio Teheran. Teheran may be the best pitcher on the Braves, at least in terms of his talent, and by the end of this season he could have the numbers to support it, too. If you watched the game on TV, you’ll probably remember F.P. Santangelo talking about this mysterious fastball that Teheran was throwing. He mentioned it several times, and it was strange to me – F.P. and Bob talked about a 92 mph (or so) fastball, and another one in the mid-to-high 80s that had more movement. They discussed how much it could mess with a hitter that he could just vary his speed with one pitch to throw what they called a “BP fastball” versus his regular one.

But this didn’t seem right to me. Wasn’t he just throwing a 4-seamer and 2-seamer, or something like that? He wouldn’t be the first guy to have the different fastballs thanks to a different grip. So I turned to Brooks Baseball to look it up, and here is what it showed for the game:

According to Brooks, he doesn’t just use those 3 pitches of fastball (4-seam), changeup and slider. The curve may be an anomoly, but clearly, the PitchFX data shows that he has a different fastball. That doesn’t necessarily refute what FP was saying, but it doesn’t say it’s the same pitch.

Diving a bit further into the movement – we can see that the sinker does indeed sink quite a bit more than the fastball. The chart below is from the display for Vertical Movement + Gravity (which I believe is the best way to indicate the absolute vertical drop), and it has almost 9 more inches(?) of drop.

A little further investigation takes us to Teheran’s landing page, which sheds a bit more light on it. It says he has both a Fourseam Fastball, a slider, a change, a curve which he “rarely throws” and a “Sinker using a Two-seam Fastball grip.” Interesting… it seems that his pitch does have something weird about it. But just in case you thought this was all a computer analysis his PitchFX data and trying to fit a pitch into a category, they actually point us to an article from last spring about how he really likes his new (at the time) two-seamer.

Mystery solved, I think. Well, actually, two mysteries solved. The first being how he was using a BP fastball and a regular one without really showing by arm action or anything else that he was doing something different. He wasn’t – he has a 4-seamer and a weird 2-seamer.

The other is why F.P. had such a problem figuring out what he was doing. F.P. has to have seen pitchers with a 4-seam and a 2-seam fastball  million times, so why didn’t he notice it here? It appears that the ball didn’t really behave the way a normal 2-seamer does, and it was acting more like a sinker, probably leading to the confusion – on the part of F.P and the Nats hitters.

Edit: After posting this, F.P. was kind enough to offer some response to what I was saying. He didn’t really refute what I wrote, but he responded which is awesome. His point, if I didn’t make it clear above, was that Teheran was working in an almost 10 mph range with what was essentially one pitch.

Even if it is two pitches, which I believe, the difference between the 4 and 2 seamers are supposed to be minimal – they are two sides of the same coin. So he wasn’t at all incorrect to say his fastball was coming in at all those different speeds – because they were all fastball. Anyway, here are his responses for your viewing pleasure:

And of course, the piece de resistance:

As an aside… Just in case you forgot how amazing F.P. is, there you have it. To me, he challenges the stereotype of the retired-athlete-as-color-analyst in a good way. He has never once seemed smug or disdainful or the fans in general or the blogger community specifically. Thanks, F.P., this kind of conversation is very much appreciated!