Will MLB Drive a Political Change? 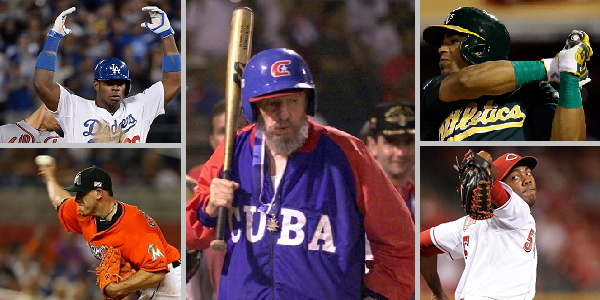 Once upon a time, Major League Baseball was at the forefront of a major sociopolitical change in the United States. The integration of the leagues happened too late for those of us looking back (how would Josh Gibson have done in MLB? How would Babe Ruth would have performed in an integrated league?), but much more so for those that actually suffered from the discrimination.

Integration was, however, ahead of its time compared to the state of the country. The country’s attitudes followed baseball, rather than the other way around. As noted by NPR’s Scott Simon, who wrote a book titled Jackie Robinson and the Integration of Baseball

Robinson became a great symbol and inspiration for the civil rights movement… “Jackie Robinson not only changed the game of baseball, he changed the country that nourishes baseball.”

We are all better for it, regardless of how far race relations may still have to go.

In hindsight, it was an obvious choice to make – thankfully you’d be hard-pressed to find any critics of integration today. Since then, though, there hasn’t been much of anything that baseball has done that influenced the world outside of baseball. Free agency affected the sports world for sure, but beyond that, there just isn’t much.

That could change, as Major League Baseball now has a chance to impact the US political landscape, albeit in a much smaller way than racial integration.

A few weeks ago, the Cuban government completely changed course on allowing their athletes to play professionally outside of Cuba. According to the Economist:

on September 27th the island’s daily newspaper, Granma, announced perhaps the most symbolically resonant reform yet: Cuban athletes in all sports will now be allowed to compete in foreign leagues, as long as they pay taxes of around 20% at home and remain available to play for their country in major competitions.

The Economist pointed to Cuban stars playing in MLB as a major driver of this change, specifically naming  Aroldis Chapman, Yasiel Puig, Yoenes Cespesdes and Jose Fernandez. Of him, they said

Perhaps the most impressive of all is José Fernández, a 20-year-old who had to fish his mother out of the water while escaping Cuba on a boat to Mexico. His earned run average this year was 44% better than the league average, the best ratio for a rookie pitcher since 1911.

I don’t know what’s more surprising, the fact that the British news/international affairs mainstay included some strange version of ERA+, or that they linked to Grantland.

Much of the impetus for this move also seems to be a push from the Mexican league, according to Ben Badler at Baseball America, which had already made an agreement with Cuba for a couple of players to come over before they changed the law, in addition to the desire to reduce defections. Unfortunately for us MLB fans, it won’t necessarily mean that we will soon start seeing as many Cuban players as we do those from the Dominican Republic. As reported on abcnews.com, the Commissioner’s office did issue a response, and in typical fashion, it contained some hidden meanings:

There are no provisions in the major league rules or bylaws that make it more difficult for Cuban ballplayers to play Major League Baseball, but MLB and its clubs have and will continue to act in accordance with the laws and policies of the United States government.

And there, at the end, is the rub. The US government doesn’t allow it

The United States’ trade embargo bans any transaction that would fund the Castros’ government. As a result, the requirement that Cuban athletes playing abroad pay local taxes on their income would prevent MLB clubs from signing players who plan to comply. Only outright defectors would be cleared to suit up.

Now, the ability to play abroad almost certainly makes it easier for a player to defect, but the incentives might not be there anymore. Cuban players probably dream of playing Major League baseball, but they most likely dream of making more than $20 a month and not worrying about feeding their families well before fame and fortune. And fame and fortune can still come in the Mexican League, or the Nippon Baseball League, or anywhere else outside of the US, just to a lesser degree.

Will some Cuban stars take this opportunity to make a double jump, first to success in international leagues before leaving for the US? Probably. But more will choose the alternative: make money similar to AAA (with significantly lower cost of living) or the possibility of $5M in Japan, pay taxes, still be pretty damn rich in Cuba, and retain the ability to play for their home country in international competitions, live with their families, or just visit home on occasion.

As more Cubans leave legally to try their hand in professional baseball with salaries well over $20 a month, we’ll see how many take that extra step to get to MLB. Many of the very best players will probably be happy playing international ball without having to defect, and won’t want to change their political status. That means MLB would be out of the question. Unless the US law changes.

MLB is an extremely powerful entity. Considering MLBAM might be worth $6 B and the individual teams combined are around $20B, it wouldn’t be out of the question to suggest it could be a $25 B or $30 B or business. That doesn’t make it as big as any of the 100 largest companies in the world, but it starts to approach the top 50 US.

Those companies are pretty influential, but MLB’s influence certainly goes beyond it’s size, as evidenced by the amount of money ESPN, Rawlings, Las Vegas and fantasy sports sites are making off of baseball. But the Antitrust exemption (because it’s not a business, it’s just a game!) is probably better evidence of how much sway MLB holds in the US. Any other institution would by now be subject to the same laws as other businesses, certainly other sports leagues, by now.

The question for baseball, then, is whether or not it wants to try to change these rules. MLB could, if the Commissioner, the owners or even the players union so desired, attempt to influence this country’s policy towards Cuba.

Cuba is an issue that politicians must be very careful with, particularly in Florida, and therefore doesn’t tend to get addressed by them. But if MLB sees a business opportunity, they may well throw away any political concerns, despite the Ozzie Guillen “situation” in Miami.

The political winds may be shifting, anyway. Much like the political winds shifted in the US, at a glacier’s pace, after World War II. They shifted just enough to allow Branch Rickey to play Jackie Robinson, something that might not have been doable a decade before. Today, many younger Cuban Americans favor lifting the embargo.

The results here are less clear, though. This isn’t a no-brainer morality issue, like integration, and there are some who believe vehemently that an embargo of Cuba is still a worthwhile policy.

Should MLB fight against that policy? I’m not sure lifting the embargo would work to fix Cuba’s economy, they have plenty of problems that have nothing to do with the US. The tourism industry in Cuba wouldn’t mind it, though.

I can tell you that if Cuba was any other country, we probably wouldn’t have an embargo against them any more, especially not after their recent, albeit minimal reforms. And I don’t know if MLB would succeed even if they tried. But if any business could get it done, they could. They’ve done much bigger things than this in the past.