Before really figuring out what sort of free agents or trades the Nats should be pursuing in the offseason, it’s pretty important to determine who, if anyone, needs to be replaced. With the unfortunate position of being in charge of real rosters rather than video game rosters, GMs must be realistic in their decisions.

While it is an ideal goal to have the best of the best at every position, it is also pretty unrealistic. A more realistic goal is to have your players all be above average at their position. Couple that with a few great players, and you have the makings of a good offense.

Once the offense got healthy, this Nats team actually ended up scoring runs. As hard as it is to believe, they finished 6th in runs scored in the NL. This would have been enough, coupled with their pitching, if it hadn’t all come in July, August and September. But that was more because of injuries and bad play by the backups than anything else.

In order to determine where this lineup should be improved, it’s a good idea to check out where the Nats starting position players rank in the NL as individual. I did this once, back in July, and I wanted to do it again for the whole season, to see how the guys finished.

As I said back then:

I took a look at every starting position player, and where they rank among their National League counterparts in terms of the main “slash line” offensive categories. Then I also showed where they rank when you average of those 4 results. I ranked it by that final average.

I highlighted those above average in blue, and those below in red, and also added the minimum number of PAs I needed to get as close to 15 players per position on the ranking.

Here is the updated version for the whole 2013 season: 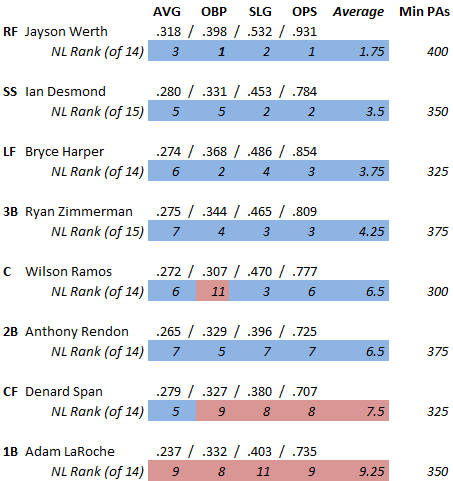 First thing that you notice is that there are alot of players on this team with above average performance. Denard Span is just below the line, and Adam LaRoche is well below it. Before we address that, though, let’s take a look at the guys above the average line.

Jayson Werth was great this year, and if the Nats had won 4 more games, he probably would have been pretty high in MVP voting. As it is, he might finish top 10. But between his performance the last two seasons, and the contract, he’s set in place.

Ian Desmond has turned himself in to one of the best shortstops in baseball, thanks to an improved glove and power. He’ll never top the league in OBP, but with his power, anything above average there is great.

Bryce Harper didn’t have the best year, went through some slumps, had some injuries… and still ended up a top 5 left fielder. A healthy Harper is a superstar, and at this point there’s no real reason to think they won’t get that in 2014.

Those 3 positions are pretty much set. The next 3 are a little different. I’m gonna start with Wilson Ramos, because I think his situation is easier. He’s never going to have a great OBP, but he’s got such power that it probably doesn’t matter. As long as he hits for a decent average, he’s a top 5 catcher. He’s got some holes in his game, but it’s hard to imagine them getting someone better than him for anything reasonable.

As for Zimmerman and Rendon, this ranking system is a good reminder of what they are and what they could be. Starting with Zimmerman, he recovered nicely after a poor April, and had a great power display at the end of the year. He’s certainly a top 5 offensive 3B, although there are real questions about his D. His throwing issues may or may not be overblown, as he has stated that he was still recovering early in the year, and his throwing definitely improved in the second half.

Rendon looked pretty good defensively at 2B, and while he is only just above average in all the hitting categories, it’s important to remember that he is a 23 year old rookie. Watching him hit, it’s hard not to imagine improvement to put him towards the top of that position’s ranking.

The question with these guys is whether or not they’ll be moved – Zim to 1B and Rendon to 3B. With their numbers this year, they don’t look nearly as good:

However, it is worth noting that Zimmerman still ranks in the top half of the league, he’s just more in the middle of the group. Rendon falls way down, almost 4 whole spots on the average, which shows the difference in the positions. He still gets extra credit for his age and projection, so it probably isn’t devastating. But all this is worth noting when talking about moving them.

Ryan Zimmerman had 21 errors this year, 2nd most among NL third basemen. But there were 5 other 3B that were in the 16-20 range, and another 6 in the 12-15 range. In other words, if his throwing is better, and he eliminates 5 errors, he’s suddenly in the middle of the pack with errors, while still being a top hitter at the position.

It’s not to say that they shouldn’t be moved, but if they are, the solution has to be better than what they’re currently trying to solve for. Moving them just for the sake of moving Zimmerman, without a good replacement at 2B, could end up hurting them offensively at three positions.

That brings us back to the two guys at the bottom of the list. Starting with Span, there is reason to think he is worth keeping right where he is. He had a much better 2nd half than 1st, and, at least according to UZR, he was the 3rd best defensive CF in the NL this year, 4th best in MLB.

A realistic, but optimistic, assessment of him gives him an OBP ranking in the 4-7 range at his position, coupled with top defense. That defense can not, and should not be discounted. And it demonstrates why measuring only hitting is incomplete. But to say that Span can’t be replaced with a better player wouldn’t be true either. The question is, how much better, and what would they have to give up to do so?

I have doubts there is a realistic replacement there that they’d be happy with defensively, and getting a crazy good bat to stick in LF and moving Harper to CF is probably less of an option  in the Nats mind, post-wall collision.

Finally, we get to Adam LaRoche. LaRoche, the team’s MVP last year (at least according to the voters, who made in the only Nats in the top 10 since Soriano in 2006). He might very well have been the team’s LVP this year, although Danny Espinosa probably gets that award. LaRoche wasn’t just bad for a 1B, he was bad for any non-middle infielder. There is some thought that he’ll recover next season, but at his age, it’s not likely that it will be to acceptable levels.

There is no doubt that LaRoche could be replaced with someone better… but how much do the Nats want to spend to do that? We’ll get into this more as the offseason rolls on, but here’s a very different perspective, with genuine LaRoche numbers:

Now is that spectacular? No, but it’s not too bad, and it might have been enough this year. What is it? It’s LaRoche vs RHPs, and where that would rank in the regular 1B list. It’s not great, but it’s good, and it shows what he can still do at an above average level (barely).

More than that, though, is it gives the Nationals another option – find a platoon complement for LaRoche, and play him only vs LHP. I’m not a talking about “hope” at a platoon complement like Tyler Moore, who just isn’t reliable enough (yet?). I’m talking a genuine righty slugger who can put up those kind of numbers whenever a lefty starts against the Nats.

I’ll start diving in more over the next couple of weeks, but this analysis reiterates what I’ve been saying for a bit. First, that there aren’t that many guys that can or should be replaced. Besides the difficulty of swapping out a team, they actually performed quite well, for the most part. It showed up at the end of the season in the 6th place in runs scored, but it also has room for improvement at the bottom.

But 6 of the 8 position players (other than a possible Rendon/Zim positional move) should stay the same going in to next season without much question. This is a good thing, because it’s probably not realistic to think they could get anything much better.