Corey Brown – What Took You So Long? 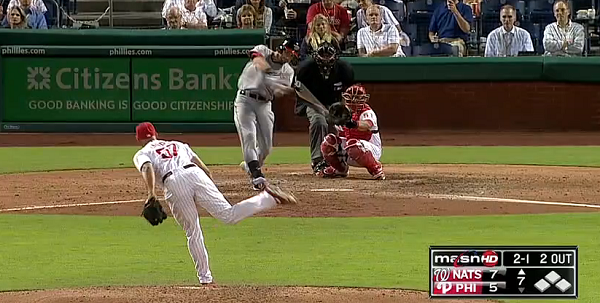 Last night, in his first AB this year, Corey Brown hit a moon shot HR. Seriously, he punished that baseball. Here is the no doubter, if you haven’t seen it.

That was enjoyable, for certain. But Corey Brown has shown that kind of power in the past, and he hasn’t gotten much of a chance in the big leagues. Not much at all. In fact, over the last year, he’s had only 28 PAs in the majors, and 992 in the minors. In that time he managed to hit 44 minor league HRs, and 2 MLB shots.

Last year’s minor league stats were better than this years (.888 OPS vs .799) but he’s managed a .271/.348/.501 line over the last two seasons in AAA. The numbers are certainly good enough to get him on the big league squad, but they didn’t do it this year before the September call ups. 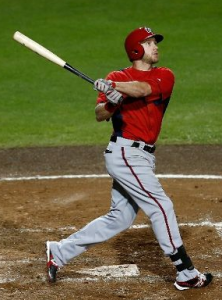 He also has a great reputation as a defender, and plays CF as well as RF. That would imply (and the defensive stats aren’t readily available) he’s got range and at least a decent arm.

So you’ve got a good defensive outfielder that can play all three positions, and can certainly hit HRs… but he hasn’t played before last night. Why?

The answer you’ll usually get is that he’s left handed, and they don’t need more LH bench bats. This is sort of true. They entered the season with Roger Bernadina as the 4th OF and LH bench guy. And it made sense, he had a low-power but impressive nonetheless .291/.372/.405 in 2012. Replicating that would beat out Brown, no doubt.

But Bernadina hit only .178/.247/.270 this year, and his magic was gone early. Tyler Moore also performed poorly enough (.158/.206/.274 when he was first optioned in June) to be sent back down. They actually did it with Moore, who, as a RH hitter, fills a different role than Bernadina or Brown in a way. But a 4th OF need to be right or left handed, they need to be adequate.

Instead, when the Nats needed outfielders, they wedged in some other guys who are really just potentially decent hitters as middle infielders, in Lombardozzi and Kobernus, rather than using a real OF. Those guys hit just as poorly, for the most part, and the Nats were stuck with bad backup OF play.

Was Corey Brown going to do better than this? I think so. He certainly has more power than any of those guys but Moore, and seems to have a good eye. Here’s was Baseball Prospectus said about him last spring

We’d like to say Brown’s a higher risk/higher upside guy than Bernadina just to make the story simpler, but he’s not higher risk. He’s not on the 40-man roster, so he’ll probably start the season at Triple-A, but Brown hits and fields at least as well as Bernadina, and has demonstrated the ability to draw a few more walks.

There’s little evidence to think that has changed, other than two years of success in AAA.

Corey Brown most likely could have provided an OPS over .520. Of course, the Nats had no way of knowing that Moore and Bernadina would be so bad. I think plenty of people were sensing regression from both of them, but probably not that bad.

But by June, certainly by July, Brown should have probably gotten his chance already. Instead, they went with powerless middle infielders filling in for injured players, as well as additional Bernadina time.

Would calling Brown up in July have made a difference? Well, that I don’t know. They’ve been more healthy since then, so he might not have gotten 300 PAs even as the 4th outfielder if he was recalled in late June. But with the often punchless offense that the Nats have shown, and the pretty strong pitching, it’s not hard to imagine another couple of HRs making a difference in a few games.

No, the Nats wouldn’t be sitting atop the NL East, or probably even the Wild Card if Brown had been used earlier. But when a guy hits like he did in AAA last year, and when your bench is as bad as the Nats’ bench, you wonder what they were waiting for to bring him up.

But instead taking a chance on a guy with a good eye and real power, they stuck with the guys who weren’t performing, and now they sit – 7.5 games out of the WC with only 24 to go. Those are tough numbers to see together, and you wonder how they’d look if Brown was here the last 2 or 3 months instead of some of the other bench players.

I’ve added the full table showing the production of the 4 backup outfielders (in PAs as OF/DH only) to further depress you: