Gio Starting to Bring the Heat

A few weeks ago we took at look at PitchFX to help understand and explain exactly what was going on with Gio Gonzalez. He is currently sitting with a 4.97 ERA, and he certainly hasn’t been the same pitcher he was last season, when he finished 3rd in Cy Young voting. His velocity was down, but after only 3 games, it wasn’t easy to know if it was down for the count.

He is now 7 games into the season, and the answer still isn’t clear, but we have a much better idea. In his first game of the season, his velocity was down below 2010 levels. And in his third start, it was below 2011 levels, pretty much on par with 2010. I suspected that it might be a result of the time of year, and the weather, rather than a permanent trend. Thankfully, that does seem to be the case.

Below I’ve mapped out the average velocity of his 4 seam fastball and his 2 seamer. The first 3 tick marks (green and orange) are his 3 years prior to 2013, and the remaining marks (blue and red) are each individual start this year. 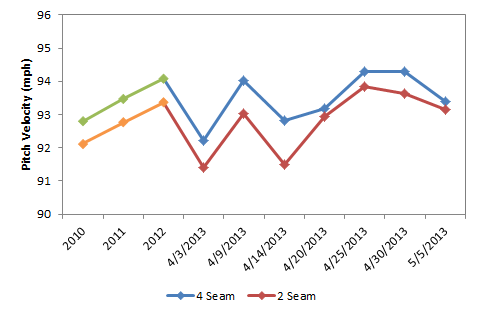 His 1st and 3rd game this season were the low points of his velocity. He has gone up since then, and his 5th and 6th starts seemed to match his 2012 velocity, although his 7th start did see a dip. Some of this is probably to be expected – pitcher’s don’t have the exact same fastball every game.

Although it is hard to imagine his ability to prevent runs from scoring to be totally dependent on velocity, it probably isn’t a coincidence that his ERA improved as his velocity did over the years. Ok, maybe it is a coincidence, as he also had more experience under his belt. But I figured his higher velocity games would yield better results. At least in terms of ER, it doesn’t appear that this is the case. 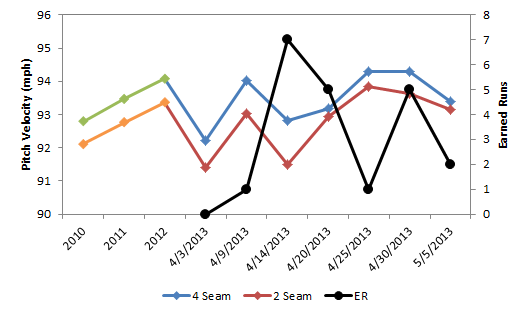 Maybe it doesn’t matter at all that his velocity has dipped a few games. After all, his best game and his worst games this year, in terms of ER, were his two lowest velocity games. Then again, his 2nd, 5th and 6th start, which were his other strong outings, were when he had a 4 seamer that averaged over 93.4.

There are alot of things that go into ERs, and despite the first part of the acronym, defense is one of them. To look at 7 starts, and try to determine ERs, basically the final result of a pitching performance, is probably ludicrous. It’s probably just too many levels of management from the CEO to the mailroom, here. Is that it then, can’t tell too much based on velocity?

Maybe not. Strikeouts, after all, are pretty independent of defense, field conditions and a bunch of other factors. Gio relies on his curveball to help him with getting strikeouts, or getting hitters closer to being struck out, so to ever imagine that velocity is the only factor would be silly. But it’s got quite a bit more to do with strikeouts than it did with ERs. I can say that with some amount of confidence, because I’ve already seen the chart. So without further ado, that same velocity chart, but with strikeouts instead of runs earned 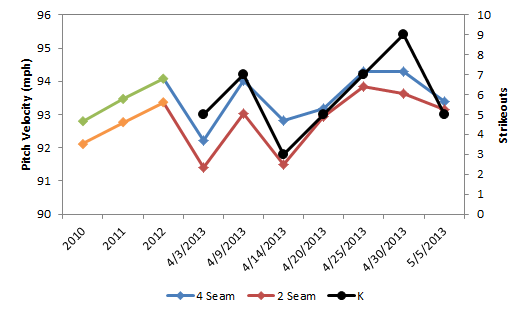 The correlation is pretty easy to spot there. Gio is definitely relying on that velocity, at least to a point, to assist in getting strikeouts. This isn’t a particularly stunning revelation, although I am surprised at how closely the trends do follow.

Obviously, this number of strikeouts aren’t necessarily an indicator of what the results will be. In his 6th start this year, he managed to both strike out 9 and give up 5 ER in only 4 IP. An intriguing but unsuccessful outing. That being said, striking out alot of batters is usually better than not doing it. I have a feeling that over the course of a larger sample, the higher strikeout games (for almost any pitcher, not just Gio) will have the best results.

Velocity appears to be pretty important for Gio’s strikeout totals. As someone who walks a high amount of opponents, and as one of the 100% of MLB pitchers who really can’t make the opponents hit ground balls directly at his fielders, strikeouts are pretty important for his success. Jordan Zimmermann can get away without as many strikeouts because when he’s at his best and the ball does get hit in a hole, there aren’t a bunch of guys standing on the bases thanks to free passes. Gio doesn’t have that luxury.

The good news is, despite the strange ER results, Gio does seem to have gained most of his velocity back. Hopefully after a few more games, we’ll see the trendline stick right around the 2012 levels, and his strikeout totals will remain high.