Are Zim’s Errors that Bad? 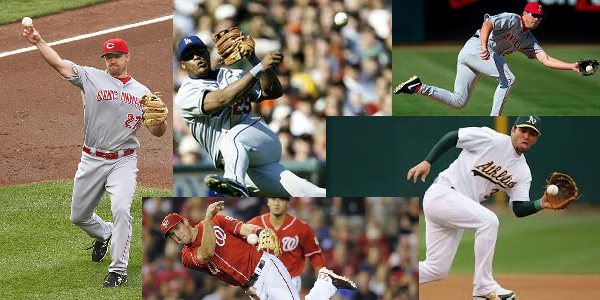 Is Ryan Zimmerman a bad third baseman? That the premise of the argument that many people are making to move him to first base. Of course, the argument is easier to make when you have a very impressive young prospect 3B in the form of Anthony Rendon. And yes, I know that there’s more to the argument – that he’s injury prone and that he’s worse now than he was before, specifically with his throws. But talking about how many careers errors he has like he’s done poorly really seems wrong to me.

The clamor for moving Ryan to 1B didn’t start this year, but it certainly has picked up steam with his 4 throwing errors in only 15 games. While this looks awful because of the short timeframe, it is not likely that he would continue at this rate. Still, it highlights that he isn’t fielding well. Now, if he simply cannot make the throw to first anymore, of course they shouldn’t play him at third. But there is no way to know whether or not this is a permanent ailment until he plays more. And while he’s sitting on the DL, we are stuck with just remembering his poor early play.

As for the argument that he isn’t a great third baseman because he can’t throw, going back to look at his careers errors just doesn’t hold water. Of course, we know that errors aren’t necessarily the best judge of a fielder anyway because assigning, or not assigning, an error is based on the judgement of one of the 30 official scorers. But with that aside, let’s take a look at Zimmerman’s career stats along with some other recent third basemen.

First of all, I did my best to look at the same number of games that Zim has played – 984 (I’m not sure where the discrepancy of 962 comes from in Loverro’s article, I got my data from Baseball Ref, but that’s a minor difference). I also tried to pull guys in similar age ranges for those approximate number of games. I only looked at their 3B stats, so some guys, like ARod, just didn’t work for the age (although I included ARod anyway in his first years at 3B). I looked at current guys and some of the best 3Bs of the 2000s.

The stats are pretty self explanatory although RF/9 may be new to people. This is just one measure of a players range. It is a simple formula: 9 * putouts * assists / Innings. It, in other words, measures how many baseballs a guy got to during a 9 inning game. It isn’t the end all be all of fielding stats by any means, but it is a great measurement of range. I’ve sorted the list by errors per inning played, as we’re really discussing his errors.

As you can see, Zim falls in the middle in terms of errors/Inn. He certainly isn’t doing as well as Rolen and Chavez, who were considered some of the best fielders in their time, although he beats out Wright and Aramis Ramirez, who also get a great deal of respect for their glove.

He is very similar to Adrian Beltre, who has been considered a great 3B for his career (and has 4 gold gloves in his trophy case). But ARod is a different story. Although ARod has fewer errors per inning, his range factor is significantly lower than Zim’s. This isn’t surprising due to age, but it also makes it difficult to say ARod is the better fielder – fewer errors but many more baseballs going in to the outfield doesn’t suggest ARod is superior.

When we do look at range, Zim comes out looking pretty good, too. He is fourth in range, and number of assists, behind Rolen, Beltre and Chavez. This, coupled with his errors, suggest that while he isn’t the best third baseman, he is quite strong. He’s got a good range and his errors committed compares well with the competition.

Some will say that all that matters is what’s happened in the last 15 games, or even the last year. But 2012 wasn’t a particularly bad year in terms of his numbers – 19 errors is less than 10 more errors than what a superb 3B is gonna do. His hitting, compared with many 3B in the league, should make up for 5 or even 10 extra errors. That’s what’s really important to remember. If Zim is gonna make 40 Es, moving him is a discussion worth having. If he’s going to make 20, it probably isn’t a big deal.

It’s really only the last few weeks that play into him being a bad 3B, because for his career, despite those 117 errors over 9 seasons, he’s been a good fielder. The more recent throwing issues are much more troubling than any history this guy has.

The fact is, it’s extremely difficult to make a case that he can’t play very good third with only 15 games of evidence. The case on his career numbers aren’t there, and until we see him play more and continue to make horrible throws, its hard to say he isn’t able to make the throws.

As we discussed last week, Zim isn’t nearly the star at 1B than he is at 3B. If Zimmerman comes back and simply cannot make throws consistently he might need to be moved. But if we’re talking about a guy who’s going to commit 20 errors instead of 12, then it’s hard to justify his move.