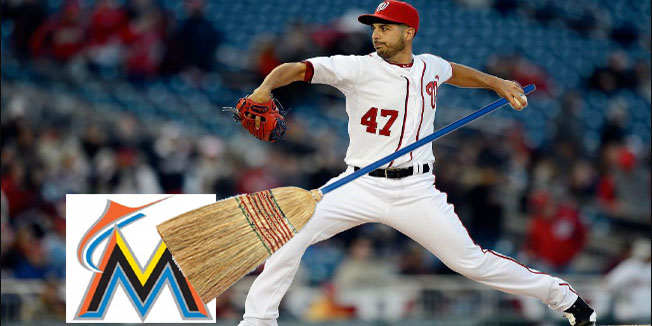 After a sweep of the Marlins, the Nationals are ready to get their season started. On Friday, the preseason ends, and they’ll have to play a real baseball team with actual Major League players.

All kidding aside, the Marlins aren’t exactly a very good baseball team. But even the best team against the worst can’t realistically expect to win more than 2/3 of the time, so a sweep was certainly nice. And it was great to see this pitching staff dominate a team. Yes, the lineup doesn’t have any power aside from Stanton and Ruggiano so it allowed them to go right at hitters. But three starts from Strasburg, Gio and JZimm that yielded exactly 1 run is impressive nonetheless.

The bullpen also looked great, and kept the Nats ahead in some tight games. If Henry Rodriguez could be an effective reliever, which he was on Thursday (when the game was still close), watch out. It may not be as flashy at Atlanta’s but it could be the deepest bullpen in the league.

The lineup didn’t look spectacular in the first two games, but Bryce Harper sure did. And by the end of the series, there were a few more hits to go around. Ryan Zimmerman is off to a hot start, and Ramos and Span hit well in this first series.

If you want some more in depth analysis on the series, I highly recommend following this link.