USA and Gio Get a Win 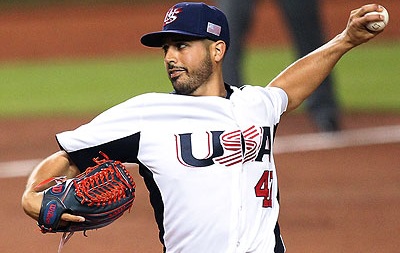 Team USA started out the second round of the WBC with a big win over a strong Puerto Rico team. This was thanks in no small part to two NL East stars from last year – David Wright and the Nats’ Gio Gonzalez. Wright broke the game open in the 8th with a bases clearing double to bring a 4-1 lead all the way up to 7-1, and that was probably the hit that will be remembered from this one. But Wright had two other RBIs, one off a groundout to make it 2-0 in the third, and one off a single in the 5th to bring the lead to 3-0.

The game never got closer than a 3 run differential after that, and the biggest reason the PR team couldn’t score was Gio Gonzalez.

Gio wasn’t brilliant, but he was very good in 5 innings. He didn’t quite hit the 80 pitch limit imposed in a round by the WBC, but hit 69 pitches made his removal in the 5th logical, and will likely keep him out of the remainder of this round.

Gio did his job and then some, striking out 5 in those 5 IP, and walking (gasp!) none. He only gave up 3 hits, and only got into any sort of trouble in the 4th, when Carlos Beltran doubled off the wall in center. After a a groundout by Yadier Molina to move Beltran to third with two outs, Mike Aviles came up and smashed the ball to RF, but Giancarlo Stanton made a great catch to rob him of extra bases, and PR of a run. Gio didn’t have all of his best stuff, according to Harry Pavlidis (Founder of Pitch Info, contributor to Baseball Prospectus & Washington Post):

that was a nice curve by Gio, most of them haven't been too much of anything. Fastball's been nice.

His curve wasn’t spectacular for most of the night, which is to be expected in what is essentially spring training with meaning. He didn’t shy away from the curve, by my count he threw them in 19 out of his 69 pitches. This is 27%, right in line with his career frequency of 26%. If this was a playoff game, I’m not sure if he would have gone away from it or stuck with it, as they were winning the whole time. But by the end it definitely looked better than early on – his two strikeouts that did come on curves were both in his last inning.

What’s important about that is he was getting outs against good players without his best curve, at least until late, which gives you an idea of how good his fastball can be. He was brilliant and looked just like the Gio that Nats fans want to see.

Team USA, meanwhile, will play the undefeated Dominican Republic on Thursday (7 pm). The DR is also made up of many All Stars, including Cano and Hanley. The good news for the US is that their pitching staff isn’t as accomplished, although they have yet to give up more than 4 runs in a game during this tournament. Appearing for the DR, so far on the bench, is legitimate Nats prospect Eury Perez, likely to be used if needed as a baserunner or defensive replacement. Both teams have to either win Thursday or defeat the winner of PR-Italy to move on to the semifinals.