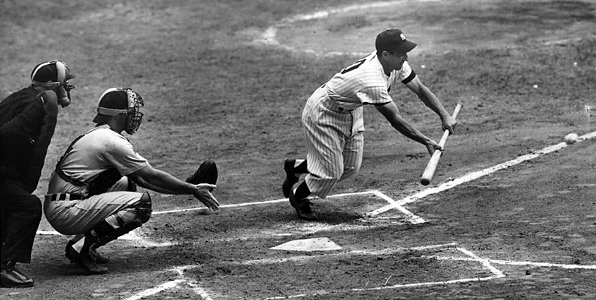 Earlier, I posted the Rich Garces All Star team, an all big man group. The requirements to make this squad are similar to the Garces team: they have to be current players, they have to fill a specific position, and they have to be decent full time or close to full time guys. Except, for this team, rather than having a gut, the requirements are they have to be small, or at least relatively small for being pro athletes. I was thinking of naming this team after Eddie Gaedel, the 3’7″ man who only had one ML appearance and walked, but as fun as this is, I have tremendous respect for these players. Instead, I thought it would be more fitting to name them after a small (5’7″) Hall of Famer, one who was once almost denied admission to a game he was playing in because the guards couldn’t believe he was a player. So, without further ado, the little guys with big hearts – the Phil Rizzuto All Stars.

nicknamed Pudge isn’t what you normally think of as a small guy. But as far as backstops go, he is short and, unlike a few years ago, he’s thin. He is considered by many to be one of the greatest defensive catchers of all time, he has 13 gold gloves, is the all time leader in putouts for the position and has close to a 50% rate at throwing out baserunners, something no catcher with significant playing time even approaches over the last 30+ years. The future Hall of Famer can also hit, while his power has faded as his size has over the years (Pudge was once a real home run threat) he still hits better than most catchers. He has career splits of .302/.339/.478, evidence of a free swinger who has hit for average and power over the years.

1B – Mark Loretta – 6’0″, 185 lbs – This is the position hardest to field on this team. It is the quintessential big man position. Not only are range and speed less valued here, the taller a 1B is, the better stretch he can make when receiving a throw from the infielders. It’s also a position that is usually for power hitters, if you’re not large enough to hit for power, you probably aren’t playing first. Exhaustive research revealed nobody considered a 1B under 6’0″. In terms of starters, the closest thing to a small player is Ross Gload, but the day I call him an All Star caliber player is the day I forget what OPS means. Mark Loretta, a career 2B, has 195 games at first, a total of 1200 innings, so for this, he qualifies. His All Star resume includes an actual trip to the ’04 All Star game, his career year where he hit .335/.391/.495 and hit 47 doubles. His career splits of .296/.361/.397 give a good indication of a singles hitter who could always get on base, but usually didn’t hit with much power.

believe that the diminutive 2B was on the verge of an historic power season. He only hit 8 more the rest of the year, but he managed to also steal 27 bases and have an OBP of .387. An ideal leadoff hitter, Roberts walks alot, steals alot, and has enough pop to make pitchers think twice about what to pitch him. Career splits of .281/.351/.411 are impressive, but don’t do him justice as his first 3 seasons were poor, he has done much better since 2004, and already has 3 HRs this season.

career, he started out on the extreme latter end. Despite hitting well in the minors, Anahein was able to claim him off waivers from the Red Sox. At age 26, he finally got his shot in the majors and proceeded to hit .285, steal 29 bases, and finish 4th in the rookie of the year voting. His sophomore season was a nice follow up as he batted leadoff for the World Champion Angels and reached base at a .363 clip. Despite his lack of power, he also managed to hit a grand slam 2 games in a row. Four years later, he was a World Champion again, this time with the Cardinals. He also won the World Series MVP, hit He will always be one of my favorite players to watch in the field because of the way he puts every ounce of his body into a throw to first.

3B – Chone Figgins – 5’8″, 180 lbs – When Desmond DeChone Figgins steps to the plate, the infield gets a little nervous. They know if the ball is hit towards them, they’re gonna have to get rid of it quickly in order to get him out. He’s fast, and while he has been criticized for not having much power, he is still a very valuable asset. His career splits of .294/.356/.398 are pretty indicative of the type of player you’re gonna get – he get alot of hits, walks a good amount, and hits with little power. His speed has led to 154 SBs from the ’05-’07 seasons, while playing pretty much everywhere in the field other than pitcher and catcher. Actually, Chone has logged at least 150 innings at every position other than those two, and first base. I’m guessing if he ever needed to fill in there, he’d probably be able to hold his own.

LF – Shane Victorino – 5’9″, 180 lbs – Shane’s moved over to CF for the Phillies this season since Aaron Rowand left, and maybe that’s where he’ll be for a while. But the other guys on this list have never played LF, so his stints there make him the most qualified. In his two full seasons as a starter, both with the Phillies, he’s hit around .285/.346/.419 showing a little bit of power and a lotta bit of speed. Last season he hit 12 HRs and stole 37 bases while only being caught 4 times. His speed and place of birth have earned him the nickname “The Flyin Hawaiian” and while he is a very different player than the man he replaced – Bobby Abreu – he has given Phillies fans another, albeit less mentioned than his teammates, quality young position player.

CF – Corey Patterson – 5’9′, 170 lbs – Sure Corey Patterson has trouble getting on base. He makes a good example of the bad kind of leadoff hitter – managers are fooled by his speed and don’t notice his career OBP of .297. But Patterson has had some good seasons, and when not looked at as a leadoff guy, his value becomes a little more apparent. He has a good deal of power for someone his size, with a career ISO of .158, and don’t forget, he is fast. He is a legitimate threat to steal 40 bases each season, and throw in the possibility of hitting 20 HRs, or at least something close to it, and you can see why even though he’s not a great leadoff hitter, he can still add value to a lineup if used properly.

the first Japanese born full time position player in the majors and has been a staple of All Star games (7 appearances and an MVP award) and had an incredible rookie season. He became only the second player in history to win both the Rookie of the Year and MVP awards in the same season. 2004 was a major record breaking season for Ichiro – he broke the single season hits record that had been held since 1920, he was the first major leaguer to have 200 hits or more in each of his first 4 seasons, and broke Wee Willie Keeler’s record of most singles in a season, held since 1898. Besides being an incredible hitter, he has also won 7 gold gloves, in no small part due to his incredible arm. Ichiro is also unique, his approach to the plate and almost running swing are instantly recognizable, and he’s the only major leaguer that wears his given name on his uniform.

UTIL – Dustin Pedroia – 5’9″ – 180 – If that is your real weight… Dustin looks a bit smaller than that to many observers, but maybe it’s because he’s always hamming it up next to heavyweights like David Ortiz and Manny Ramirez. Pedroia is your prototypical completely underestimated prospect, he hit well enough in the minors, but then everyone said he wouldn’t be able to hit in the majors. In late 2006, he seemed to prove the analysts right hitting .191/.258/.303. But the next season he exploded going for .317/.380/.442, and while he hasn’t shown a ton of home run power yet (although that may come), his 39 doubles last year were enough to give him enough power to be a formidable player. Incidentally, he also was named Rookie of the Year and helped win the World Series in 2007.

SP – Tim Lincecum – 5’11”, 170 lbs – It may not seem tiny, but that’s about as small as starting pitchers get. Besides, according to Jeff Passan of Yahoo Sports, the man nicknamed Seabiscuit by the scouts thanks to his completely undaunted approach to the biggest and toughest hitters, might actually not even weigh 160. In his rookie 2007 season with the Giants, he showed that he is a big part of the future of that franchise, finishing the season with 150 Ks, good enough for 5th place in the NL despite throwing only 146 1/3 innings. This season, he’s 4-1 with 45Ks in 43 1/3 innings. The little guy can make hitters swing and miss, and while this top 10 draft pick may entertain with his delivery, it’s his high 90s two-seam fastball that has helped him earned a different nickname from his SF teammates – The Franchise.

CL – Billy Wagner – 5’10”, 180 lbs – What surprised me most about doing the research for this entry was how BIG most closers are. Wagner aka Billy the Kid aka Canned Heat is actually the only under-6-foot full time closer over the last 2 seasons. Luckily, he deserves to be here not just because of his small frame, but because of his small ERA. A career closer, he’s racked up 365 saves for 3 different teams, is a 5 time All Star, has a career ERA of 2.36 and a career K/BB of about 4/1. He was born a righty but broke his arm several times and taught himself to throw lefty. It seems to have paid off, as he is one of the few pitchers to be part of the 100 mph club. Despite being 7th on the all time saves list, and despite playing for a team in New York, Wagner may be one of the most underrated pitchers of his era, and has dominated batters over his entire career.