Time for a Nats Bullpen Cart

I haven’t tackled the issue of the speed of play on this blog because I just don’t really care that much about it. But, news that they may reintroduce bullpen cars to speed up the entrance of relievers certainly has piqued my interest.

Cool feature of speed-up-the-game negotiations between MLB and players: The return of bullpen carts! Union has asked MLB to consider them, and MLB is considering it, where possible, as early as 2018 season.

Now, assuming it means we continue to get relief pitching entrance music (still holding out for Sean Doolittle to realize he should enter to a song from the Pixies second album), we won’t lose much. It’ll shave five minutes or so off of game time and, sadly, we won’t be able to get anything like the Todd Coffey sprint. But other than that, it won’t do much for the game. But it’ll bring us bullpen carts which may add a fun little quirk, or add nothing at all to the style and spirit of the game.

Going for 0 style points whatsoever, they could just use the same kind of carts that the NFL (and occasionally MLB) uses for ushering injured players off the field. These injury carts are essentially golf carts with flatbeds. Utilitarian, although not as useful for an ambulatory player. So it wouldn’t even really make sense for this, except for the fact that all teams almost certainly have one for their own injured players. But I’m gonna assume they’ll add to the garage, so let’s keep going.

They could just go with a regular golf cart style, but four-seater golf cart. The backwards-facing rear seat style cart probably makes more sense, because then the reliever doesn’t have to duck in and out of the cart, which could get awkward. 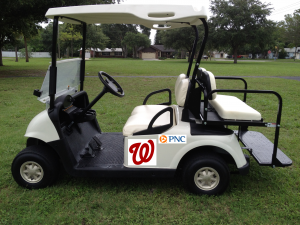 Slap a Nats logo on it, add some corporate sponsorship, and, voila. It’s boring, but it’ll work. But it would also be pretty disappointing if this was all we’re getting. If we’re gonna do bullpen carts, let’s have a little fun.

First, there is the classic baseball with a cap on it bullpen car look. It’s pretty good, and it certainly beats the look of those football injury carts. Plus, there’s still room on the front for a corporate sponsor, so the Lerner’s will love it!

If this is all they did, it would still be pretty great. Of course, as fun as that is, it is the sort of basic version of something better than a plain old cart. The Nats could get more creative than that, right?

Well, they could certainly take on the abundance of federal employees and defense contractors in the DC area. Two of the biggest defense firms are headquartered in the region and are building the latest fighter jet together, so why not have a fighter jet bullpen car?

The relief pitcher can probably get a comfortable seat in the back, but I’m open to having them transported in the bomb bay. The team could also go in a slightly different direction but stick with this theme, and just use an old school Willys MB jeep, which would be amazing looking, although the colors are all wrong. I guess they could paint it red, but then it probably loses the connection to the military.

If they don’t want to introduce new themes, they could just use the racing presidents to help out. They could do up a cart to look like something from when one of the presidents was in office. Since only one actually lived when cars were around, let’s go with him. In a very detailed and expensive artist’s impression, below is a picture of Teddy driving a car that was available during his presidency, the 1907 Wolfe Touring car. 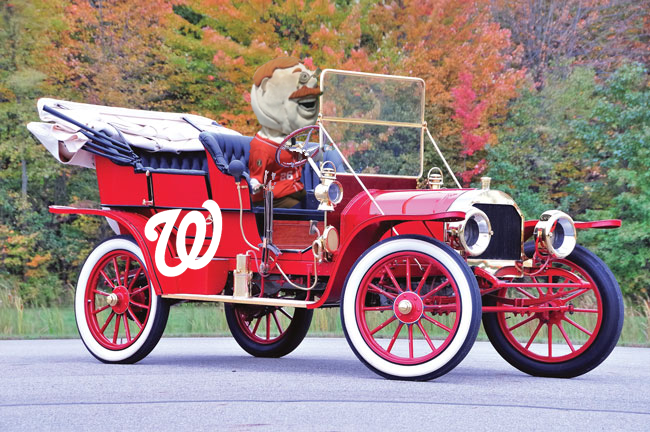 Of course, we probably can’t expect an actual car like this driving around the field, even if it stuck to the warning track. But a cart modded up to look like this? I can’t see why not.

So, here it is. The Teddy Bullpen Cart, in all its beautiful terrible hideous glory.

If the splendor of thousands of suns were to blaze forth all at once in the sky, even that would not resemble the splendor of that exalted being.” Or, possibly, it is “I am time, the destroyer of all; I have come to consume the world.”