A Shot at Relief for the Bullpen

Have you heard? The Nats bullpen is bad. Also, and this may surprise you, they traded two of their best prospects this offseason for a player who unfortunately can’t contribute right now. The cupboard isn’t bare, but it isn’t as full as it once was. And they will absolutely have to go and get a reliever, probably a closer, in the trade market. Maybe two. Maybe three. But how many they need isn’t certain. The fact is, the Nationals have two pitchers in the minors that have done all they can to show they could contribute at the big league level, and they may offer some relief to this troubled bullpen.

Gott to Get You into the Pen

Trevor Gott, who I wrote about extensively a few weeks ago, continues to impress. Sure, he gave up 3 ERs in literally his first appearance after I wrote about how great he’s been (and if he does it again, I’m going to figure out how to use that power for good), but even with those factored in, his numbers are pretty great.

As I mentioned last time, he has big league experience, pitching extensively for the Angels in 2015. He’s only 24 years old and he’s got a mid-high 90s fastball that makes you think this isn’t just someone fooling AAA hitters, but someone who might actually be effective. It’s especially encouraging to see the strikeout rate at about 1 per inning, something we didn’t see with him in the past.

The one people have heard a bit more about this year is probably Erick Fedde. He became the Nats top pitching prospect when they traded Giolito and Lopez, and while he maybe isn’t projected to have quite their ceiling, he is still considered a possible #3 or even #2 starter if everything goes right. He had Tommy John surgery in 2014, and by last season he was back to throwing in the mid-90s.

Describing his 2016 season, Baseball Prospectus said this about his pitching

He sat in the mid-90s and touched higher, and his slider flashed plus. The fastball has enough life to be a swing-and-miss offering in the majors and the slider has a good chance to get to that point as well. At it’s best it features violent late, two-plane break 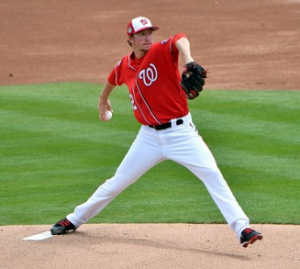 The Nats moved him to relief about a month ago not because they don’t see him as a future starter. They do, in fact, apparently they like him better than they did Giolito which is why they moved the latter this offseason rather than him. But they saw how bad this bullpen was looking, and realized Fedde might be able to help them this year in the bullpen, especially considering their starting staff looks pretty good as it is. With only two pitches that might be great right now, he’s probably better suited to relief work at the moment even if they did need another starter.

Since moving to the bullpen, he has thrived. His first 3 relief outings each resulted in an earned run, although that might have been part of an adjustment period. Since then he’s only given up 1 run. He’s thrown 13 2/3 innings in those 10 appearances, and besides the 4 ER (a 2.63 ERA) he’s given up 11 hits and walked 4. He’s also struck out 19, demonstrating that he can overpower hitters, at least at the AA level.

Cavalry or Not, It’s Time for Their Shot

Fedde looks like he could be a very strong late-inning reliever right now. His strikeout rate is eye-popping, and his stuff is great. Gott probably isn’t as good, and his strikeout rate, despite throwing mid-90s, is a bit disquieting for me. But he is striking out more guys than he did before, and he’s keeping the ball on the ground, which is helpful. He has shown he can be effective at the AAA level, and while I think Fedde is more of a safe bet, they both need shots on the major league team. Nobody should be blocking them.

It’s hard to put into words just how bad the Nats bullpen has been. And I do like to point out that there are a few bright spots. I think Koda Glover, despite a couple of bad outings and a high ERA, has looked impressive. He had a dominant month of May, and the concern there is to keep him healthy more than whether or not he is good. He’s been in professional baseball for something like 22 months, with a grand total of 126 IP at all levels. I like what I see there. Outside of that, it gets harder to find the good, but some exists. Oliver Perez is almost unhittable when facing lefties (.567 OPS against this year), Enny Romero seems to be an effective middle reliever, and Matt Albers continues to be great, including a 29 Ks to only 4 BBs in 25 IP.

But this doesn’t get them anywhere near what they need. Unless Shawn Kelley and Blake Treinen can both figure it out and Joe Blanton comes back and it turns out he was just bad because he was hurt, they are missing way too many pieces. And while I think it’s worth throwing these guys out there to work on things, I am not particularly optimistic about any of them.

They need help, and they need help badly. That they will have to trade for that help is not in doubt. But how much help they will need could be reduced drastically if Gott and Fedde are effective. The bright spots that are in the bullpen will look a great deal brighter with one or two more stabilizing additions. But they need to start figuring this out now, because in 3 or 4 weeks, the stores will be open, and it will be time to go out and make trades. Now’s the time to start figuring out what really needs to be on the shopping list.