How the 2016 Nationals Stack Up to Other Nats Teams

As the Nationals sit atop the NL East, with the second best record in all of baseball, I got to thinking about how this team might compare to other Nats teams. So, I took a look at the best seasons (by WAR, averaging the Fangraphs and Baseball Reference numbers) to see where the guys on this team stack up. Now, there isn’t a ton of history here, so being the best at a position ever for the Nats really means being the best in a decade, but that’s still something.

Starting with the two players who are having the best seasons of their careers, Wilson Ramos and Daniel Murphy, they are also the two who sit atop the Nats all time lists for their positions. Ramos is nearly a full win better than his closest competitor, 2005 Brian Schneider, and the catcher list after that is all previous Ramos years.

Murphy sits atop the 2B leaderboard, and it isn’t close, although Danny Espinosa’s first few seasons stack up pretty nicely here, and there is a 2007 Ronnie Belliard appearance.

As for position players, the next best probably belongs to Trea Turner. He ranks fourth on the CF leaderboard, despite playing in less than half of this season. He will probably work his way up to 3rd, settling in behind 2012 Bryce Harper and 2014 Denard Span.

Despite a slow start, Anthony Rendon’s season ranks him fifth all time among Nats third basemen, thanks to a great second half. He has a chance to catch up to Ryan Zimmerman’s 2007, but won’t catch his own 2014 or Zim’s 2010 or 2009, all 6+ WAR seasons.

Harper’s season has been a bit disappointing, but he still ranks 5th among Nats right fielders. With a strong September, he might catch 2005 Jose Guillen to move into fourth place, but the 2013 and 2014 Jayson Werths are uncatchable, as is 2015 Bryce, the uncontested leader in Nats single season WAR.

At shortstop, while he’s been undeniably streaky, Espinosa has just managed to put together a top 5 season, although it ranks pretty far behind the legend that was 2008 Cristian Guzman, as well as Ian Desmond’s 2012, 2013 and 2014.

That leaves only left field and first base missing from our list of position players. First base, thanks to Zimmerman’s injury and poor performance has pretty much been a black hole for this team all season. Left field, however, has been pretty good for the last few months.

Jayson Werth’s season numbers just aren’t going to look great because of an awful first two months, but his bat has recovered enough to make his hitting line look good. His defense has hurt him, although it’s worth noting that, as unkind fWAR and bWAR are to Werth, Baseball Prospectus has him at a 2.1 WARP player with a month to go.

As for the pitching staff, it looks really good as well. Max Scherzer is turning in the second best pitching season ever for the Nats, behind only Max Scherzer (2015 vintage). Tanner Roark gets no love from Fangraphs (or BP for that matter), but thanks to a high bWAR, he finishes 10th. On the other hand, bWAR is pretty unkind to Stephen Strasburg, compared to fWAR, and the average puts him 11th.

Altogether, the Nats are seeing top 5 performances from six of their eight position players, with a good enough performance out of a seventh, especially with the bat, to leave little worry. Only first base seems to be an issue.

That, along with three of the best starting pitching seasons in the last decade for this team, gives them 9 players ranked in the top 5 (top 11 for pitchers). This is the most they’ve had in any single season, although you can bring the number of pitchers down to 10, or up to 15, and make it tied with the 2014 season. Unsurprisingly, then comes 2012 (with 7) and then 2005 (6) as you go down the line.

While this team doesn’t have a long history to look back on, this may well be the best collection of individual talent they’ve ever had. It is easy to understand why they have fared so well in the standings, and it gives a little extra hope for success in the postseason. 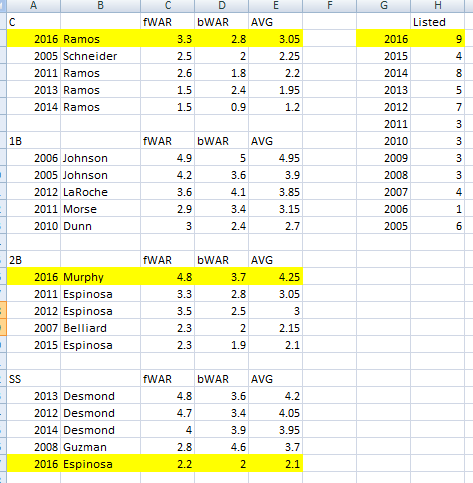 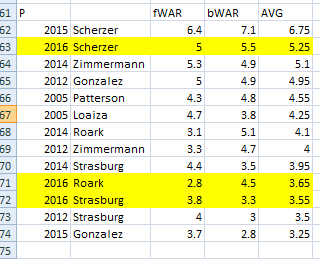