Harper May Be Back Already

A game in the thin air of Colorado is all a hitter needs to get his swing back, right? Bryce Harper got to play the Rockies, and had two hard hit doubles, so maybe it’s true. Obviously, one good night hitting, especially one in Denver, is probably not the best way to judge how well someone is hitting.

There are, however, some actual signs that he is emerging from a slump – signs that are less likely to be attributed to just luck. But they have little to do with the thin air of Coors Field.

Harper’s been scuffling since early May, and seemed to be getting worse as the weeks came and went. An analysis of his play that I found particularly insightful was by Rob Arthur for FiveThirtyEight. The article attempted to explain exactly what was going on, rather than why it was happening.

It uses  Statcast, a technology that utilizes cameras and radar to track the baseball and player movements at all times. Statcast adds a new level of accuracy to some traditional measurements like pitch velocity and hit distance, but gives us a myriad of other pieces of data such as defensive route efficiency, pitch spin rate, and batted-ball exit velocity.

Arthur essentially lays out the case that Harper’s “predicted batted-ball value” – that is, what you’d expect him to hit based on the Statcast data – is lower than in 2015, because of a reduction in exit velocity. In simpler terms, he was not hitting the ball hard enough.

Since his analysis suggests average or aggregate exit velocity over time is a good indicator of the origins of poor hitting, then it should also be a good way to recognize an emergence from that slump.

While a few hits here or there may excite, we know they may just be a couple of lucky bounces.  But, if we have faith in exit velocity as the key reason he has struggled, then a sustained improvement in exit velocity should signal his return to form. Going back to Arthur’s article, written before Harper sat out a week for a week, this chart (via Arthur’s article) shows Harper’s slow descent into exit velocity hell before bottoming out at the beginning of July.

Importantly, though, there is also a sharp increase lately. Since coming back from his injury, it has continued to improve. And that increase has continued beyond his week off for injury, as evidenced by this chart (via MLB) 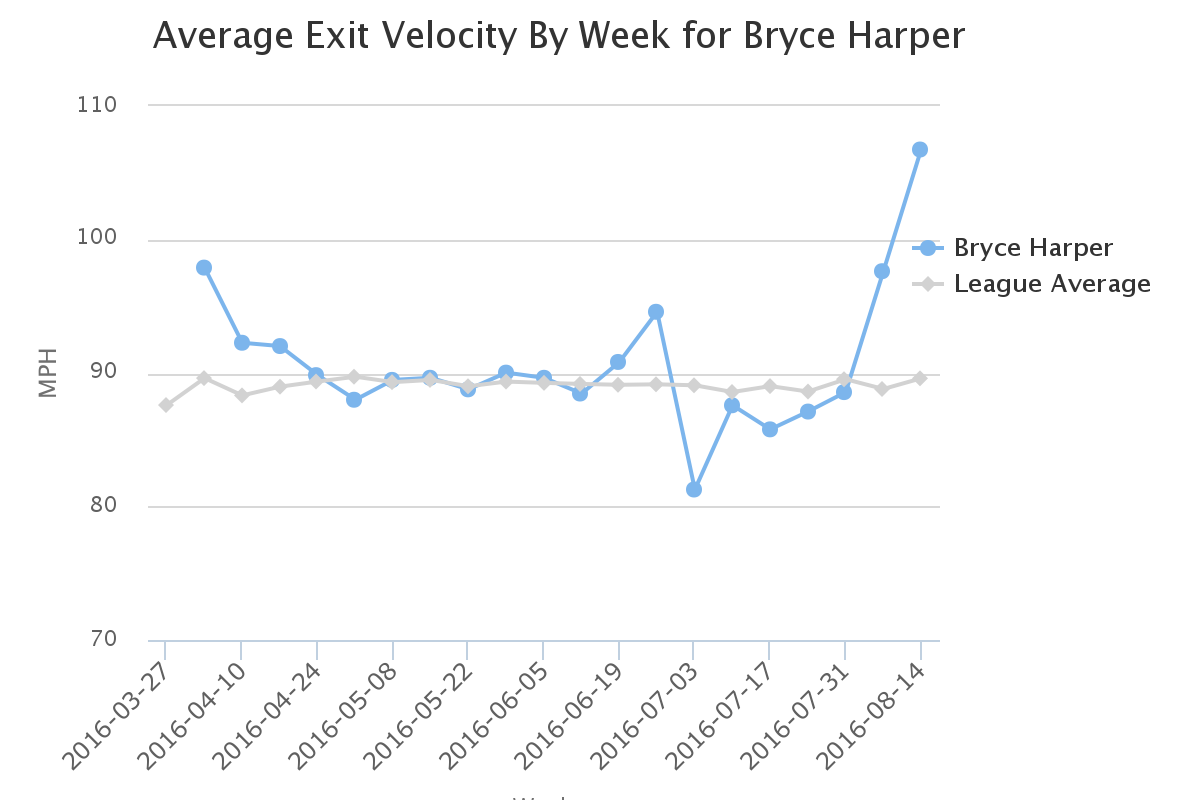 Harper has backed up this improved exit velocity with results. And this isn’t just over the last two or three nights, it also dates back to before his injury. Going in to Tuesday’s game, he had 8 hits, four for extra bases (all doubles) over 24 at bats. It’s a miniscule sample size, and that alone may not mean much.

The exit velocity, on the other hand, just might mean something. It is not nearly enough of a sample size either, but neither is it simply anecdotal evidence that he’s hitting again. Instead, it is clear evidence that, at least for now, he is hitting well thanks to ability, rather than luck or defensive positioning or foot speed.

If this is a turning point for Harper, it will be easy to point to a few games at Coors Field as the reason. But this probably has very little to do with it. If this really is the return of Bryce Harper, then exit velocity suggests he was already back at the beginning of August.