He’s Not the Good Old Gio, but He Is Good

With an ERA that is top-10 in the NL, and a FIP that is top-20, Gio Gonzalez has looked really good this season. But he’s not the good, old Gonzalez of 2012, who placed third in Cy Young voting and led the league in K/9. He is pitching to contact more this season, striking out and walking fewer batters. 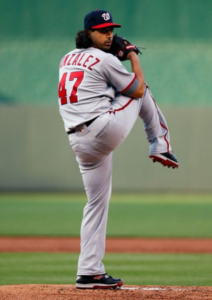 He’s mixing pitches similarly to last season, when he started using his four-seamer less than his two-seamer/sinker last season. And while he uses his curve slightly less than his changeup, his use of the curve has been declining for years.

He continues to eschew the change against lefties and his change/curve mix against righties has remained pretty consistent. The one difference this season is a greater use of his sinker, in lieu of his curve and his four-seamer, against lefties. The increased use of his sinker is perhaps a small bit of evidence that he is trying to pitch to contact.

So far at this early point in the season, people are swinging at his 4-seamer and his changeup at higher rates than normal, but at lower rates for his sinker and curve. Meanwhile, they are whiffing less on those swings for every pitch but the curve.

The curve, which was his hardest pitch to hit a few years ago, has behaved in a probably unsustainable way. It has a very high swing-and-miss rate from righties, while lefties haven’t missed it yet this season. Taken in total, though, all of his pitches have seen less swings and misses in 2016 than in prior seasons.

He is throwing a bit softer than in years past. While he and Mike Maddux have said it is due to his mix of pitches, this isn’t really true. His 4-seamer has been sitting around 91.0 and his sinker around 90.5 – both of these are nearly 2 mph slower than last season. So sure, he’s been using his sinker more, but he also has lost velocity.

He was seeing more soft contact early this season, but at this point, he’s right at his career average. And his hard contact is a bit high compared to his average right now. What he has managed to do is give up fewer line drives and get a bunch more infield pop-ups. This has translated to a lower batting average against. But can he keep it up?

There is certainly evidence that it isn’t sustainable. His SIERA (a FIP-like ERA estimator) is worse than usual, and his BABip is low at .275 (although that’s not insanely low). His infield popup percentage of 17% is so high, his career average is 8.8%, that it is clearly the result of a small sample. Heck, even his impressive FIP is not nearly as impressive as his ERA.

Eno Sarris of fangraphs writes that Gonzalez (and James Shields) is a sell candidate, “Why would the lowest velocity and lowest swinging strike rate and the lowest strikeout rate of his career lead to some of the best recent results?”

Gonzalez probably isn’t going to stay around the top 5 in NL ERA, but that doesn’t mean he won’t continue to be a very good pitcher this season, and that reason is Mike Maddux. Or rather, the tweaks Maddux has helped Gonzalez make.

Maddux wants pitchers to increase late movement on pitches, even if it’s at the cost of some velocity. He has also changed Gonzalez’s delivery a bit, eliminating a “quick look down as he raised his leg,” ensuring that he is now always looking at the target.

He also has his pitchers charting the game before their start, something that one assumes is more useful to guys like Gonzalez, who have velocity and can no longer strike out 200 a year.

All of this has probably shown up in his low walk rate, and perhaps his lower strikeout rate, as well. The low BABip may be result of the changes, too. A regression of some sort is in order, but if the changes that Maddux initiated are the source of some of this improvement, while we may not being seeing the good, old Gonzalez, this may be the good, new Gonzalez.