ERA and ERA+ are pretty great stats for pitchers, and the Nats just picked up David Carpenter, a reliever with a 4.82 ERA and an 82 ERA+. In return they gave up Tony Renda, a good hitting 2B with no power who is probably completely blocked for years to come in the Nats organization.

Carpenter’s numbers aint great, but they’re also a little deceiving for a reliever, especially this early in the season. A great ERA is great, but often a high number can hide good performance. And from 2013-2014, he was good, with the Braves. He had a 1.78 ERA in 2013, a higher 3.54 in 2014, but overall, a good run as an effective reliever. So, is a good pitcher hiding in there this year?

The first thing I looked at was how he performed game by game. Let’s take a quick look, but sort it by number of runs given up. 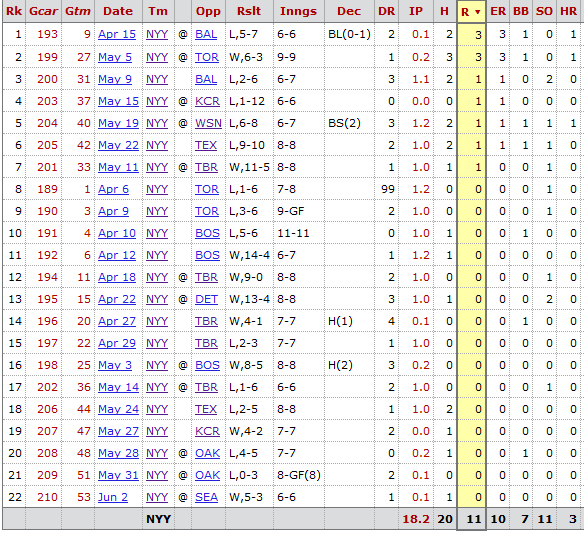 Right away a few things pop out. First of all, he’s given up runs in 7 of his 22 appearances, which is pretty good, not great, but good enough. One run in 1/3 of appearances, assuming they are 1.0 IP, gives you an ERA of 3.00. So being on pace for a little bit under that in terms of games where you’re giving up runs isn’t too bad.

Of course, the numbers then get swayed because he had two awful games – more than 1 ER, and less than 1 IP. So first clue that he might actually be alright is in the individual games, which, from that one indicator, suggest he might be just fine.

Another indicator, in the opposite direction, though, would be his strikeout rate. He’s struck out only 11 guys in 18 2/3 IP, which is a low 5.3 K/9. It’s really low for a back of the bullpen reliever, and looking at his career average of 9.3 K/9, it’s totally off. So, has he lost the ability to strike guys out, or are we talking about sample size issues here?

Moving over to Brooksbaseball, let’s do what I did with Espinosa last week – compare his 2013-2014 numbers to his 2015. This shows little change in his pitch selection – he relies mostly on a four-seam fastball (~75%), with a slider (~20%) and an occasional splitter (~5%). The splitter was a little underutilized this year, but it was used to infrequently anyway I’m going to pretend this is a physics problem and just eliminate that as an issue for ease of analysis.

As for the four-seamer, the first thing I looked at is velocity. This is essentially the same, differing this year by 0.16 mph, which I don’t think is enough of a difference for concern. The horizontal and vertical movement have increased a bit this season, as has his ability to throw it for strikes, so while more movement isn’t a bad thing, he might have to learn to harness that better. As it is, though, his strike rate on the ball went from 28% to 24%, certainly a difference but maybe not such a big deal. 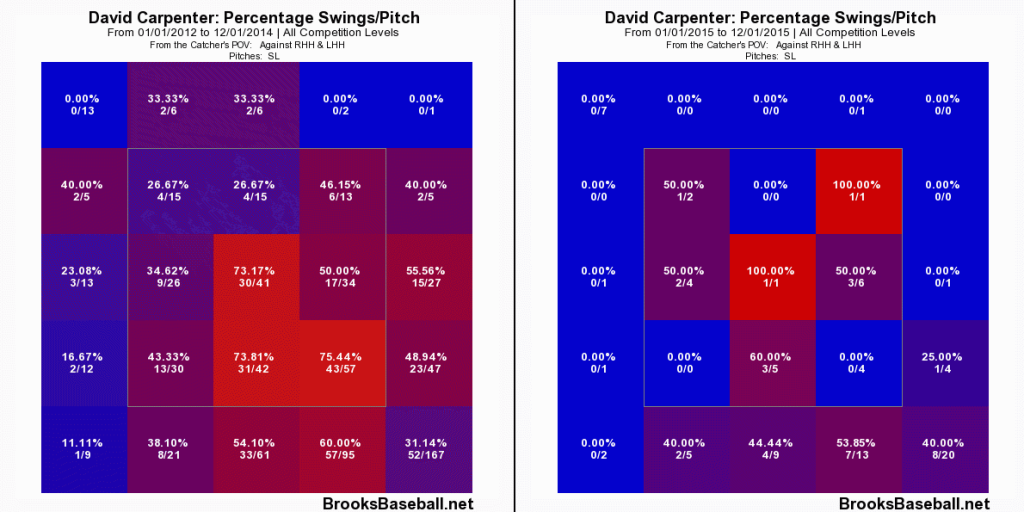 This is for his slider only, and it shows that, like most sliders from righty pitchers, it mostly goes to what would be low and away to a right hitter. But this shows that guys just aren’t swinging at it as much. Now, maybe those bright red spots in the strike zone are actually a good place for guys to not swing (when they hit the ball in play on those two boxes in the strike zone that make up the lower right section, hitters were 21 for 47), but it’s still probably a bad sign.

It seems a couple of things are going on with Carpenter. For the most part, he’s still put together very good outings, and probably isn’t as bad as his ERA indicates. His strikeout rates are down precipitously, and it doesn’t appear to be from his fastball, which is maintaining that rounded-to-96 mph velocity. His slider, though, hasn’t fooled many hitters this season. That could be a temporary, or small sample problem. It could also be that they can see when it’s coming. So when you see him pitch, see how hitters react to the slider, and you can probably guess how he’ll do.