Down the Road with Espi and Yuni

Going in to this season, you wouldn’t have been alone in predicting that 1/5 of the way through the season, Bryce Harper had the best offensive numbers on the Nationals. And while you’re guess for who is the next most productive player might not have been Denard Span, you probably wouldn’t have been shocked to see him there. But I’m not going to talk about the these two guys. Instead, I want to the next two guys down the list, the guys you would have never predicted being there.

We are 20% done with the season, and the 3rd and 4th best offensive players on the Nats have been Danny Espinosa and Yunel Escobar. Some of this certainly has to do with other players’ injuries and slow starts. But that isn’t all of the story, or even most of it. Most of the story has been how well those two are hitting.

Beginning with Escobar, at least he was supposed to be the starting second baseman this year. Regardless of where he’s playing, he’s been in all but four of the Nats games this season, and has the third highest OPS. He’s hitting .342/.388/.423 and is leading the team in hits. This comes from a guy who had a terrible 2013 and 2014, but his career line of .278/.348/.382 suggest he has some ability to hit.

Of course these numbers will see regression – he’s not going to hit .342 all year. And he’s not hitting with much power – like his career line suggests, once his average recedes, his slugging will likely dip below the .400 mark. But that’s still great for a middle infielder (which he is, despite where he’s playing today), and we’ll take a closer look at this in a minute. 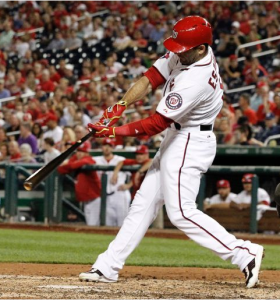 Before we do, though, let’s take a look at Danny Espinosa. Espinosa was supposed to be there as the backup middle infielder, who could spell the guys occasionally against LHPs – the only ones he had ever hit against. He also decided to stop switch hitting, because he was so bad from the left side against righties. Nobody expected that to be an easy transition, but if he could just be not horrible against RHPs, his numbers vs LHPs suggest at least a valuable backup.

Instead, he’s hitting .265/.344/.470, and he’s still switch hitting. His numbers against lefties look fine, as they always do, although it’s only 24 PAs from that side. But his numbers against righties look great, in comparison to what he had done in the past. He’s hitting .246/.333/.508, reflecting his legitimate power, and good results from shortening his swing. His new LH swing has done something besides add power – it’s reduced his strikeouts.

Right now Espinosa has 20 strikeouts in 94 plate appearances, or 21% of the time. For his career, his number is nearly 28%, a significant difference (in a small sample). Like, Escobar, some of this will probably even out, but there is still real improvement there, and gives some sense for his development.

Where Does That Lead

The important thing right now is that these two players are contributing in ways that a) we probably didn’t envision and b) are absolutely needed. But it’s hard for me to not look forward to 2016, when Ian Desmond is probably gone, and it’s likely that the middle infielders in the farm system aren’t ready to take starting Major League roles. Are these two able to take over as the starting SS and 2B?

As they are playing right now, the answer is a clear yes. In 2014, there were 34 shortstops in all of baseball with at least 250 PAs. Only two of them had an OPS over .800 (Tulowitzki and Danny Santana). Move that OPS line down to .750 and you only get two more. Ian Desmond was 5th with .743. In fact, having an OPS over .700 would put you in the TOP TWELVE in all of MLB for shortstops.

Why is this important? After all, these guys probably aren’t going to finish the season with OPS’s (OPSs? OPSes?) over .800. But over .700? That’s certainly likely (although we saw a somewhat similar, certainly shorter, hot start from Espi in 2014 and he tanked soon after, so much remains to be seen). And an OPS over .700 puts you in the top half of middle infielders in the league. When the Nats are looking to see who can play those positions next year, they might be hard pressed to find someone better than the guy they probably expected to use (Escobar) and a guy they probably didn’t (Espinosa).