MLB has a new promotion asking you to go vote for the “Franchise Four” for each team, and for the Nationals, the franchise includes the Expos. Because the Nats haven’t exactly been around a while, you end up with most of the players actually being Expos, with Ryan Zimmerman as the sole Washington representative.

Many would think, in addition to the one National selected, there is room for a few others. But getting to eight quality selections is probably too hard.

Eight terrible players, though? We could probably do that. In honor of entering yet another season where the Nats are favored to make the playoffs, let’s look back at, in no particular order, the eight worst players in Nationals-only history!

FLop has the distinction of being the only player with over 800 plate appearances and a negative fWAR. Lopez did have a reputation for being lazy and not caring (something that you have to often take with a grain of salt) but this may have been true considering he was later release by the Cardinals for repeatedly showing up late. When he came over from the Reds, he looked to be developing into a power-hitting middle infielder. 1354 PAs later he had only managed 13 HRs with the Nats before he was released in the middle of the 2008 season.  Nats fans had to deal with watching a young, promising trade acquisition lose his ability to hit, never acquire an ability to field well enough for his position..

So, Mike Bascik was a bad pitcher. The Nats have had quite a few bad pitchers in their history. But he has the lowest fWAR of any Nats pitcher, which would probably put him on this list anyway. Looking back, I was surprised to see the journeyman pitcher managed 20 starts for an injury-riddled Nats in 2007. But he’ll mostly be remembered for giving up the record breaking home run number 756 to Barry Bonds. For a franchise that still had two 100-loss seasons ahead of it, this was one of the most remembered events with any Nationals-relevance by the rest of the general public for a few years. His embracing of and apparent joy in being involved in the event rubbed many Nats fans the wrong way. His awful Twitter comments a few years later rubbed everyone the wrong way. 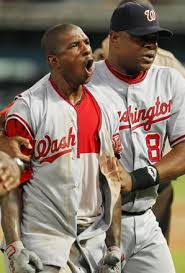 He does have the highest WAR among these guys, although that is wrapped up mostly in his defensive value. It was also almost entirely from his brief and impressive 212 PA stint with the team in 2009. His 2010, when he was in DC for the whole season, was barely above replacement level at a 0.7 fWAR (or below it according to his -0.6 bWAR). His exuberant personality was enjoyable when he was doing well, but it manifested different in 2010, when he has a number of lowlights including throwing his glove into the stands when he missed a catch allowing an inside-the-Park HR, throwing a baseball at a fan, and getting into several on-field fights. It didn’t help that the potential CF of the Nats future had a paltry .633 OPS in 2010 and while he did steal 34 bases, he got caught an amazing 17 times, given him a SB percentage of only 66.6%.

It’s a little tough to put Lombardozzi here because he wasn’t really a terrible player with the Nats. But, he’s a backup second basemen, and there isn’t really room for too many of those guys in the majors. He also had a fairly ok 2012 which may have given him too long of a leash in 2013, when he was awful. I struggled with putting him on here, but he’s also symbolic in many ways as a sort of poster child player that fans love because he’s “hard working” but not actually good enough to get real playing time on a winning team. And yet, he somehow wound up with 755 plate appearances for a team that, at the point, was supposed to be making the playoffs.

The list of terrible Nats starters is a long one, but Armas gets the nod because of just how many games he started for them. Of all the Nats pitchers with an ERA over 4.50, only Jason Bergmann has more starts (at 50). Of the top 15 Nats by games started, only Matt Chico has a lower fWAR (0.1). But Bergmann and Chico were young players on a bad franchise that were given ample opportunity to grow into the role of valuable starter and, unfortunately, failed. Armas, on the other hand, was a Montreal holdover that at one time looked like a good young pitcher. By the time he came to the Nats, he was already 27, and 4 years removed from being any good. He is the single representation on this list of the Tim Reddings and Ramon Ortizes that populated this team for so many seasons – starters that were too old to be prospects, too bad to be valuable veterans.

What can you say about Elijah Dukes? The numbers above aren’t too bad, considering they came at age 24 and 25. And he was touted as a 5 tool player and a future superstar by many in and out of the organization (including Baseball America). But he had a somewhat violent criminal past, and the Nats hoped to keep him in line by hiring a police officer to babysit him. But in the middle of 2010 Spring Training, the Nats surprised their fans by releasing him. Rizzo said that it was essentially going to improve the clubhouse, which should give you an idea of how much he was liked there. But despite the talent, and destroying pitching in the independent leagues with the Newark Bears, Dukes never got another chance. He did have plenty of chances to prove his detractors right, though, and has continued to get in trouble with the law. The list is too sad to really dive into, but it is violent and downright scary.

Milledge entered the 2006 season as Baseball America’s #9 prospect overall at age 21. He didn’t play much, but was famous for an incident where he hit a late-inning game-tying HR and high-fived Shea Stadium fans on his way out of the dugout the next half inning. For shame! A player enjoying themselves like that on the field? Tsk tsk. The next season he made a rap song with bad words in it – ill-advised but, again, not really a major transgression. The Nats traded for him early in the offseason, and it looked like the might have a misunderstood, exuberant young star on their hands. As the starting CF for the 2008 season, he was ok, a poor defensive CF with numbers that weren’t special, but still promising for a 23 year old. But the Nats soured on him as well, and after only a few games in the majors in 2009, he was sent down to Syracuse before eventually being traded to the Pirates. He never developed the power to sustain a corner outfield position, and was out of MLB at the young age of 26. He’s been playing in Japan ever since, entering his fourth season with the Yakult Swallows, where he has played well overall, with NPL career OPS over .800. Never terrible for the Nats, unlike Dukes he wasn’t really a criminal, just a guy with a problem fitting in among the other players, and inability to live up to his early promise.

Logan probably fits into the category of the exciting young player that nobody thinks is going to be a star, but people think, with a real shot, he could be an average player. He was fast, and he was a good defensive center fielder. He never did put all it together, his lack of power and his inability to hit for average canceled out any advantages his speed may have brought as a hitter. But it wasn’t his slightly disappointing career that Nats fans will remember. It was one fateful summer day, when the Nats were sitting at an ugly 31-34 record without much hope of recovery, when they faced the Indians. Leading for most of the game, they entered the 9th up 3-1 when Chad Cordero gave up 3 ER, his second worst total of the season before getting out of the inning, down 4-3. With one out and Brian Schneider on first, Logan hit a double to give the Nats second and third, one out. Cristian Guzman was intentionally walked to load the bases, and up came the Felipe Lopez. And then this happened:

It’s just one game, just one play, and just one loss in a sea of sub.-500 seasons. But nothing symbolizes those early years of the Nationals more to me than Charlie Slowes screaming “What was Nook Logan thinking? What was he watching? Where was he going? I can’t believe it”

So that’s it. Am I missing someone? Vote below, and we’ll determine the Nats Franchise Four: Terrible Player Edition. And if you’re voting for someone not on this list, please leave their name in the comments.