It’s that time again… time to rank the NL East, position by position. Over the last few years, tradition holds that a musical theme aids the entries. Whether it was Blues Rock (2014), 70s/80s Pre-Metal (2013), or Britpop / Post-Britpop (2012), the musical theme has been an integral part of the rankings that is probably used by the majority of the gambling houses in Macau to handicap the season.

This year, in honor of the Nats 10 year anniversary/birthday, I decided to go back to the year of their birth, by using the hits, non-hits, and other songs I like or think are representative of 2005.

As a reminder here are the rules:: If a team has the #1 player at a position, they get 5 points for it. If they have the worst, they get 1 point. At some point I have to make judgments about the depth chart, so I used the roster I expect to see for at least the early part of the season, on top of assessing their abilities.

And so, without further ado, here is the ranking, and music from way back in 2005: 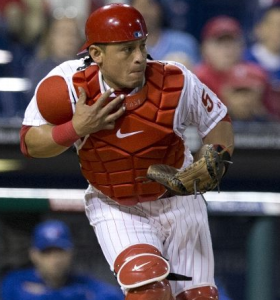 Ruiz’s 2014 was like Lazarus rising from the dead after a horrendous 2013. For the most part, he’s been an OBP machine his whole career, and even though he’s 36, he’s still played more games than Wilson Ramos has over the last any-number-you’d-like seasons. D’Arnaud had some pretty good numbers last year, at age 25, but Ramos’ age 25 numbers were better. Except that was two seasons ago for Ramos, and his age 26 numbers were worse. They two are pretty close, but if Ramos is healthy for any significant length of time, his power makes him the better player. Saltalamacchia is a decent player but nothing special, and Christian Bethancourt is 22 and deserves to play, especially since his backup is AJ Pierzynski who you’d assume will hit like he did in 2013 and 2014, not 2012. Unless he does. Then he might be the best here.

It might seem like Freeman’s a no-brainer at number one, but if not for injury risk, Zim has a strong case. We haven’t seen him play first yet, but since his range Doesn’t Remind Me of the statue of Freddie the Braves run out there, he should have the defensive advantage. And while is OBP is projected slightly lower, Zim’s power is about the same. Of course, Freeman is also only going to be 25 and has room to improve, so the bats may start to diverge more this season. Duda has always had good plate discipline and showed power last season that had really disappeared after exposure to MLB pitching. Morse has his flaws but is a source of serious power, and… Ryan Howard is making $25 million this season! 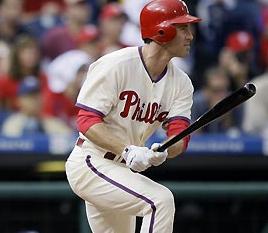 I was actually torn here. Not on Utley, who is far and away the best player on this list. Rather, on Murphy and Yunel Escobar. Murphy is the better hitter for sure, but Escobar should be the much better defender this year. Still Yunel’s lack of power means even if he can beat Murphy’s OBP, which I suspect he will, he’ll be outslugged enough for Murphy to edge him out. Dee Gordon deserves to be in the conversation with the other two, in part because he moves at the Speed of Sound, but I’m suspicious that he can keep up his numbers from last year, which were inflated on the back of a great first few weeks. Alberto Callaspo is, for some reason, the Braves starting second baseman. 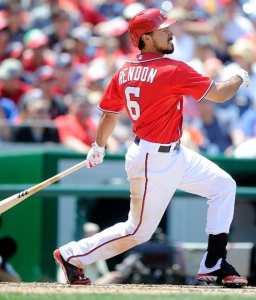 So far the Rendon fan club might as well be called Feel Good Inc. After a great rookie year in 2013, he finished 5th in MVP voting in 2014. There used to be a back and forth between Zim and Wright, but between age, defense and hitting projections, there isn’t a real competition anymore. Besides the higher forecasted WAR on BP, and the higher fantasy rankings, Wright showed almost no power last season. Rendon may be in line for a regression, but he still looks like a doubles machine who plays excellent defense. Martin Prado is no slouch, and is a strong third place winner. Cody Asche isn’t particularly good, but the Braves tried desperately to trade Chris Johnson several months after signing him to an extension, which is somewhat indicative of his ability. 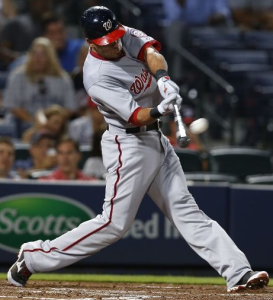 Would you rather have the Gold Glove winner or the Silver Slugger? Last year, despite not having his best season with the bat, Desmond was the better player by WAR. Simmons was such a bad hitter than even being a generational talent in the field couldn’t lift his value up enough. If he recovers, he’s probably better than Desmond overall, but it’s close, and Desmond’s in the Perfect Situation where he just has to continue doing what he’s doing, so he gets the edge. Flores is probably a better hitter than Hechavarria, but I didn’t give him the higher ranking because I’m not sure he’s really even a shortstop. Galvis is a better fielder than both of them, so if they both don’t hit, he’s better than both of em. If not, he’s last, cause he certainly won’t hit. 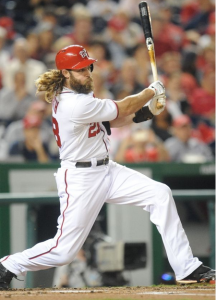 Jayson Werth had an offseason that included a court appearance where his attorney may have turned to him and said, “Sugar, We’re Going Down,” or something of the like. More important than that, though, was an offseason surgery. Despite the questions, he finished top 10th in OBP in 2013 and 2014 (and would have finished 11th in 2012 if he had enough PAs), and BP sees him with the top WAR, but what surprised me is that Yelich is so close, and Granderson isn’t that far behind. But Yelich was very good and only 22 years old in 2014. Granderson is a tougher sell for me, he was never a great OBP guy, and his power may have just started to fade. The Phillies guys have a chance to outperform some pretty unimpressive projections, and the Braves don’t appear to be serious about left field. 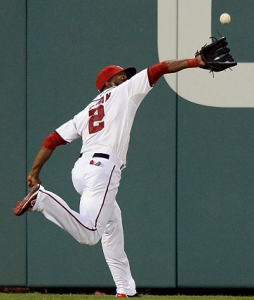 A Dirty Little Secret that Nats fans don’t want you to know: despite the incredible year Span had in 2014, by most measures of value, Legares had a better year. So why did I rank Span higher? Span’s the better hitter, and he had a down year defensively, whereas most of Legares’ value was tied to his defense. If Span has truly slipped, Legares is better. But if Span had a “down” defensive year in 2014, as we still often see with volatile defensive metrics, and he returns to normal, or close to it, he’s better. My money’s on that. It’s hard to argue with Ozuna’s 2014, even if he’s defense isn’t as good as the rest of the group. If Revere can keep hitting around .300, he’s a decent player. The new guy in Atlanta isn’t going to be any better than the old one.

If this is the year Bryce Harper truly puts it all together, he still would have a tough time catching up with Stanton, who led the league in SLG and managed a .395 OBP. He finished 2nd in MVP voting, and it’s hard to argue against him being the best hitter in the league. Harper might be spectacular, but Stanton is playing at Hall of Famer-in-his-prime levels. Between Markakis and Cuddyer, each are leaving one of the best hitters parks for one of the worst. Cuddyer was incredible in Colorado, but at least Markakis can field, so I’ll give the edge to him. The Phillies seriously plan on playing Grady Sizemore, so expect to see Darin Ruf or Dominic Brown here a bit. Between Stanton, Harper, and guys once know as their team’s “heartthrobs” (Markakis in Baltimore and Sizemore in Cleveland), this category is the one that I Bet Looks Best on the Dance Floor.

I expected the Nats to come out on top, because they have such a balanced lineup, but I was a bit surprised at how well they really did. Even if you swap a few guys here or there, they’re still the winners. But we haven’t looked at the pitchers yet. We’ll do that tomorrow. I wonder how the Nats will do there…