The Nats did not make a major move during the Winter Meetings, a big move may or may not be yet to come. But they did do something that, while not splashy, was more than what any long-tenured Nats fan would call “minor” when they traded away long-time National Ross Detwiler. In exchange from Texas, they got two minor leaguers, 2B Chris Bostick and RHP Abel De Los Santos. But before we dive into who they got, let’s talk about what they gave up. 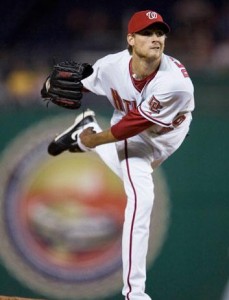 Ross Detwiler was a mainstay of this organization. More so for me, as he was part of the first draft class that truly go my attention. I started this blog in 2007 when I was living in New York and wanted to find a way to pay more attention to the team. Detwiler was the first draft pick I ever wrote about, for whatever that’s worth.

I, like many, liked the pick at the time. That four seam fastball did stay up in that 92-95 mph range, averaging around 94 mph in his career here, although never developed further as hoped. But he never looked much better than a back-of-the-rotation starter, so as the team progressed, his role diminished.

Well, never… except in the 2012 NLDS, the lasting memory he’ll leave here. Down 2 games to 1 in the best of 5, the Nats turned to Detwiler to save their season. He had great results all season, a 118 ERA+, and he was great that night, scattering 3 hits and 1 unearned run over 6 innings. The game ended with the Jayson Werth walkoff, but it was Detwiler that got them that chance.

Detwiler will be missed here, but it made sense to move him, as he was essentially stuck in an amorphous bullpen / potential trade insurance / placeholder for A.J. Cole role. Now, on to what the Nats got in return.

Bostick was signed out of a high school in that baseball hotbed, Rochester, NY. He likes Genesse Cream Ale, Kodak, and being covered in 3 feet of snow. He was drafted in 2011 by the A’s in the 44th round, and signed rather than going to college. He played some shortstop in his extremely short 2011 rookie league stint, and a little bit in 2012, but since the beginning of 2013 he’s been at 2B only. After 2013 he was traded to the Rangers for two big leaguers – Craig Gentry and Josh Lindblom.

What immediately jumps out about him is that he’s a middle infielder and he’s slated to play in AA next season. AA is where you really get an idea of whether or not a guy is a major leaguer, so the Nats will probably know if they’ve got the 2B of the future a year from now. But in the meantime, they have to go with what the stats and what the scouting report show.

The stats show he demonstrates some power for a middle infielder, and his dip in average wasn’t great, but he kept his OBP out of a a real bad spot. He had 24 SB and 11 CS, but I honestly have no concept of his speed, because of how instructional even the high minors can be for catching.

As for the scouting reports, well here’s a few for you:

John Sickels ranked him as the Rangers #15 prospect before this season, noting he’s a “Good athlete with some tools but the [home/road hitting] split is worrisome enough to sound a note of caution.”

Keith Law was more favorable with his ranking, putting him at #6 in the organization, and praised him pretty highly, saying:

Tucker Blair of Baseball Prospectus scouted him in May of 2014. He graded him at a 50, meaning he sees a major league player in there, likely a bench guy, but maybe something more. He says he’s more just athletic than toolsy, and his bat speed isn’t great. But while he doesn’t see any chance at stardom, “his approach at the plate is more advanced than most in High-A and I see no reason why it will not work at higher levels.”

CJ Wittman of BP also scouted him in May of 2014, and had a more positive take. Grading him at a 55, and calling him a major league regular rather than a bench player. He liked his defensive ability, although neither of the guys saw him as a SS. He noted that Bostick “lacks plus tools but does everything well. He has a natural feel for the game and could develop into an every day player. He’s a long way from maturity… I like Bostick enough to feel like he’ll be an every day player though.”

Here’s what Wittman said about him after the Nats got him:

So while the praise isn’t universal, and nobody is expecting Robinson Cano, a few of these guys see someone who could be an above average major leaguer. If you want to read about who the man is, check out this article noted in the tweet below

Also acquired in the trade was Bostick’s 2014 Myrtle Beach Pelicans teammate, Abel De Los Santos. Abel is from the Dominican Republic, where nobody tried to make puns about his name and his skills at pitching, although they are inevitable if he sees success here. He is a righty who has been used exclusively as a reliever the last two seasons. De Los Santos is going to be 23 this coming season, and also is likely headed to AA.

That may seem a little bit on the edge of old for a AA prospect, and maybe it is, but at least he was spectacular in high-A this year. He started 2014 in low-A, his first time out of Rookie ball and short season, but only lasted 8 appearances before going to high-A. There, he appeared in 33 games and threw 45 2/3 IP with 53 K and 17 BB. He had a 1.97 ERA, and finished 25 games, 8 of them for saves.

I couldn’t  find any real scouting on him, which should tell you something about the level of expectations. But let’s assume he’s a fringey prospect, but a prospect nonetheless when you look at the fact that he had over a K per inning and was used as a closer last season. You can guess he throws hard, judging by the fact that he’s a righty with those K numbers. But we’ll have to wait on see what the Nats are getting there.

I like the move, because Detwiler didn’t really have a role here, so it’s good they got some value for him. He’ll get a chance to be a starter for the Rangers, so maybe you think they should have gotten more. But Detwiler’s value suffered by his 2014 usage. There wasn’t too much reason to keep him – even if they traded another starter, I’m guessing they would have given A.J. Cole and Blake Treinen every chance to win the 5th starter job over Detwiler. I don’t know if these guys will end up as MLB guys, but my instincts, and past experience, tells me to trust Rizzo on acquiring prospects.