The Nats have the best pitching staff in baseball, or at least the NL, by a few measures. The lead MLB in FIP, they’re #2 in ERA, and the best and second best teams play in pitcher’s parks. That rotation is the envy of the league. In short, they can pitch.

And they can hit. While their offense isn’t dominant like the pitching, they are ranked 3rd in the NL in runs scored, 5th in OPS, and when totally healthy (which they never seem to be), it is a lineup without holes. In short, they can hit.

So, in short, can they play defense?

Fielding metrics are difficult, for a number of reasons. The numbers get skewed with shifts, for an individual, a full season might not be enough to reflect their abilities with stats like UZR… it’s just kind of a mess. But for teams, with the thousands of opportunities to make errors or outs, we can trust things a bit more. So where do the Nats rank? Starting with the traditional stat of fielding percentage, based on errors: 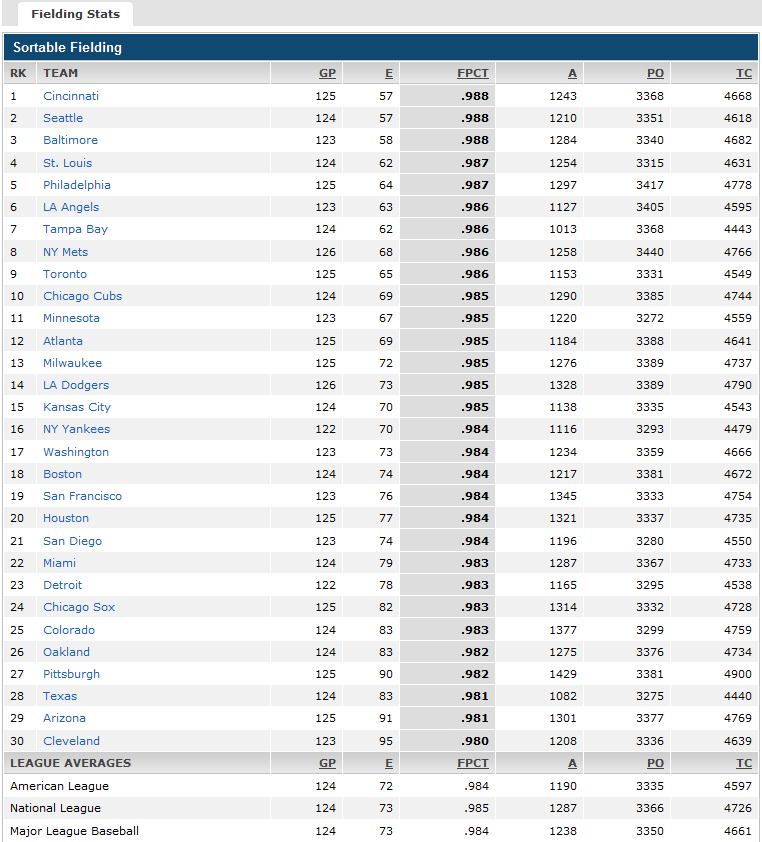 The Nats shake out in the middle of the pack – actually with the exact MLB fielding percentage – at 17th place. But we all know errors are quite subjective, so let’s take a look at this from a few other angles.

Taking a look at another set of stats, we don’t really want to factor in errors. Instead we can utilize thousands of sets of data that can then be boiled down to one or two stats. I’ll start over at Fangraphs, which is the place I usually go to see individual defensive value. It’s got UZR (Ultimate Zone Rating) which takes data from Baseball Info Solutions “to estimate each fielder’s defensive contribution in theoretical runs above or below an average fielder at his position in that player’s league and year.” 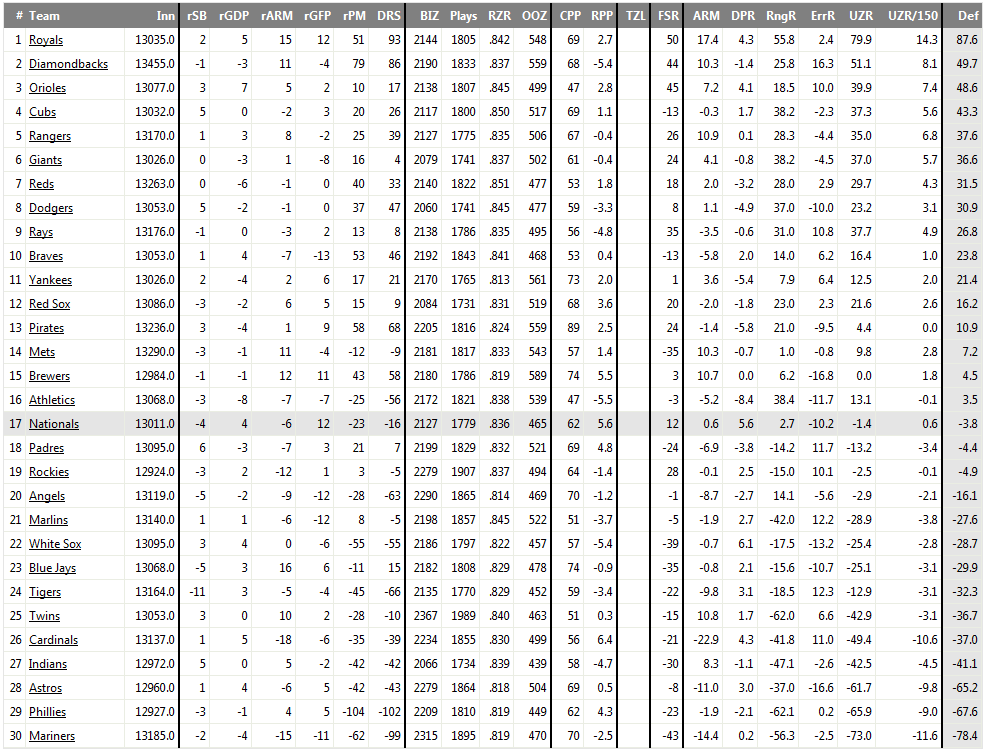 Also very much the middle of the pack, just below the average. Fangraphs aren’t the only ones who use Baseball Info Solutions to come up with fancy defensive metrics. Tried and true source for baseball statistics Baseball Reference has a stat called Rtot, which is the same thing as Total Zone. Similar to UZR, it is a defensive runs above average: 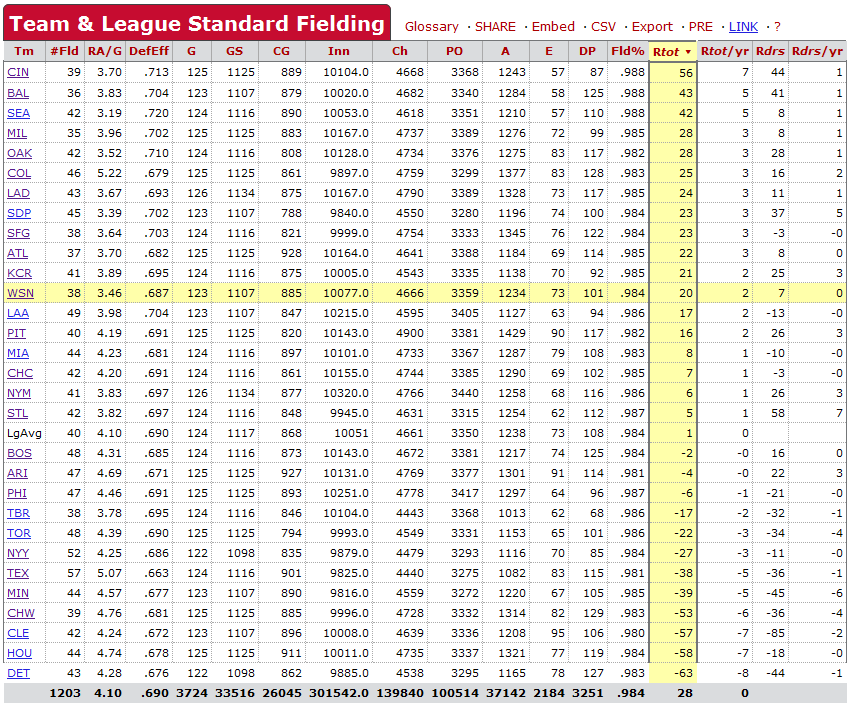 For this one, the Nats rank higher on the list, 12th for those who don’t like to press their finger against the monitor and count. They are above average here, a pretty good amount above average, although not in the upper echelon.

But wait, there’s more! We can also look at Baseball Prospectus, a sabermetric pioneer. They have a stat called defensive efficiency, DE: 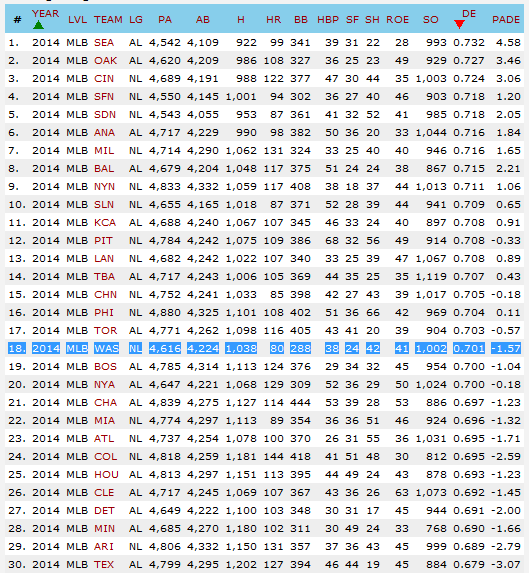 Again the Nats fall in the middle of the pack – ranking 18th. Although if you look at PADE (Park Adjusted), they in the lower cohort, ranking 24th. I’m a little skeptical of park adjustments in these defensive categories, but I won’t get into that.

By the way, looking back up at the Fangraphs chart, we could also rank by DRS, or defensive runs saved. There they rank 21st, with -16. But there is rather large group that fall from #11, the Orioles at +17 down to the Nats at -16 that don’t look that different compared to the rest of the teams.

So there you have it, totally understandable, right?

Ok, the purpose of this wasn’t to confuse with you a million defensive metrics, it was to see how the Nats are doing. And all these numbers point to the same thing – the Nats are pretty middle of the pack in terms of defense. Most show them slightly below average, one shows them a little bit more above average. Nothing really shows them as being terrible, and certainly there’s no indicators that they are spectacular.

In the end, the numbers can’t really be used, on their own, to pin down exactly where the Nats stack up. But together, they indicate that the Nats are a middle-of-the-road defensive team. It answers our general question, and that’s what we came here to do.