Last year Rafael Soriano wasn’t the old Rafael Soriano. He didn’t have the kind of zip on his fastball that he had been able to bring for the seasons before he came to the Nats, and it showed in his ability to strike people out. As noted here in late August of 2013, his K/9 saw a drastic drop, and while he wasn’t a bad closer, he wasn’t really one of the top ones in the league.

Looking at the group of closers from 2013, Soriano finished towards the bottom of the pack in terms of actual value. Yes, he finished 6th in saves, but when you look at the list of 37 pitchers with double digit saves last season, he doesn’t look nearly as good. He finished 17th in save percentage, 33rd in FRA, 27th in FIP and 32nd in WARP. The loss of the velocity on the fastball probably has quite a bit to do with it, so it’s worth checking out where his velocity sits this year.

It’s early enough in the season that his numbers themselves aren’t going to tell the whole story. Neither his K/9 (18.0) or his ERA (0.00) really mean anything, nor do his Hits/9 (15.0)… well, the hits have meant some heartburn, but the numbers probably aren’t predictive. Considering he has thrown all of 3 innings, his velocity may also not be quite where it will end up this year. But so far, it doesn’t look good.

Adding to the chart from last year, I inserted what his 4-seam velocity has averaged so far this year, as well as what the chart would look like if his K/9 went down again, from 6.9 last season to 6.0 this year. 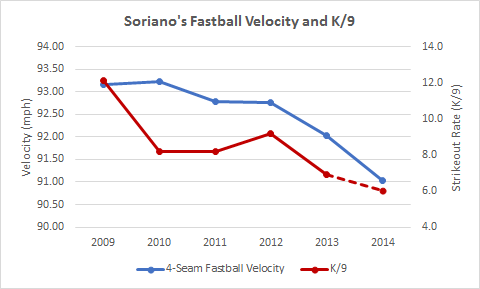 Unfortunately, neither line looks very pretty. Hopefully his current average of 91.03, an exact 1.00 mph drop from last year, will be mitigated some as the season goes on. But it also seems possible that he is continuing to lose velocity on his fastball.

The extrapolation of the K/9 isn’t even an extrapolation, it’s just me inserting what a 6.0 K/9 would look like, to compare to the drops from 2012-2013, and the mph drop. It certainly doesn’t LOOK out of the realm of possibility, but I don’t have the historical data on the world of MLB pitcher’s velocity drops correlated to K/9 drops, so take even that “eyeballing” with a grain of salt.

Regardless of whether this drop in velocity translates to a further drop in strikeouts, chances are there won’t be a big recovery in velocity. He is now 34 years old, and the velocity from two seasons ago just isn’t gonna come back. As for the strikeout rate, there’s no indication he’s adjusting by throwing more offspeed stuff (his 4-seam fastball rate currently sits around 80%, which would be his highest ever), so without more velocity, he probably won’t recover there, either.

What does it all mean? Well, for one thing, unless he has some real disasters, he probably won’t lose his closer job. That doesn’t mean he deserves to keep it, either. There are a few guys who might be better off in the role, including Drew Storen (who, despite giving up a HR against the Marlins, has looked great this year), Tyler Clippard (who hasn’t looked great so far this year,  but has struck out a ton of guys already) and Craig Stammen (6.1 IP, 7 K, 1 BB, 0 H, 0 R). And then there’s Aaron Barrett, who despite seemingly coming out of nowhere, has looked great as well.

Not all of these guys can necessarily deal with the psychological aspect of closing, nor would moving Soriano to another bullpen role (and he’s still going to be an effective reliever, just not as effective as he once was) promise that he wouldn’t falter without that closer “pressure.” But the Nats have to be aware that Soriano can’t throw as hard as he did 2 seasons ago.

This will affect the team, and the fans, because 9th inning situations will probably often be as torturous as they were last night – with a couple of guys getting on base. And he’ll often get out of the jam. But he won’t always.

They also need to be concerned with that clause in his contract – the one that gives him an automatic 2015 option for $14 M if he finished 120 games from 2013-2014. Including 3 games this season, he’s at 61 games finished, so it is far from guaranteed at this point. But they have to seriously consider that number throughout this season, because its hard to imagine anyone considering that a good value next year.