Jeff Baker – Nats Better Not Be Messing with Me

According to Jon Heyman, brought to my attention via Federal Baseball, the Nats are interested in Jeff Baker. Here’s a few tweets from the people who reported it:

marlins, nats among teams interested in jeff baker, who had .905 ops in '13. orioles possibly, too.

This is the most exciting post-Doug Fister news of the offseason to me. The Nats should be very interested in Jeff Baker. They’ve already teased me once this offseason with Mark Reynolds.

This is a big deal to me. I’m not so sure that getting Jeff Baker, Mark Reynolds or any other right handed bench bat will be the difference between a champion and any variety of everything else. But it could be, and that’s why adding one of these guys, not even a starter but a bench player, is such a big deal to me.

I’ve gone over it time and time and time again, but Adam LaRoche has not made a strong case that he can hit left handed pitchers anymore. His .791 OPS vs RHPs wasn’t horrible last year, but that may be the best word to describe his .566 OPS against lefties.

I point you once again to the OPS splits of LaRoche: 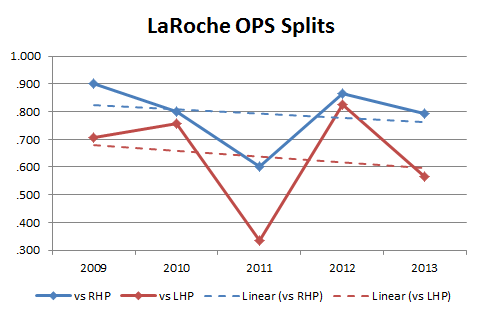 Coupled with this chart is the perfectly logical assumption that as LaRoche ages both of these trendlines should continue to decline. The blue one, we might predict, should still be perfectly reasonable next season. That red line, though, looks like it probably won’t be. Because the general decline together with the history of poor performance vs lefties just makes it too likely it will be bad. 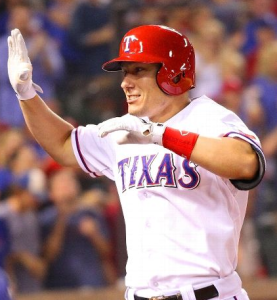 That doesn’t mean LaRoche shouldn’t get a chance to repeat 2012. He’s the starting 1B, and he might rake again this year. But to go into the year assuming that will happen, with all the data we have to show what kind of hitter he is, would be folly.

The Nats need to go out and get Baker, and add him as a bench bat. That way, LaRoche’s play in April can determine if Baker’s role expands beyond “best RHH on the bench” to “platoon complement”, rather than determining if the Nats have to make a trade midseason.