Replacing LaRoche with a Middle Infielder

In the last few days, we’ve explored how the Nats might replace LaRoche via a trade or free agency, or by turning him into a platoon player with someone who is not yet on the Nats roster. Today, we finish our three part series on the LaRoche conundrum, by examining one last possibility – sliding Ryan Zimmerman over to first base, and possibly moving Anthony Rendon to third base.

I’ve discussed in the past the issues that this may present internally with the two players, but let’s continue with the replacement discussion and examine who might come in to take the vacant infield spot. As for the position, while it is possible Rendon could stay at second, there really aren’t any free agent third basemen out there that should garner any interest, other than perhaps the previously mentioned Youkilis and Reynolds.

Because of that, I’ll focus on the Nats obtaining a middle infielder. I’m sure there are some intriguing third basemen trade possibilities, but for now, let’s stick with middle infield. If you are wondering why I’m talking about replacing LaRoche so much, I’ll point you to the Nats position player rankings in the NL, and just say that if they want to replace any of their starters, he should be the first.

I don’t like to make guarantees, but I guarantee he won’t be getting that. After the recent contract signings of guys like Pujols, and the albatross ARod, Teixeira and CC contracts, it can’t see him getting that kind of money. The question for the Nats, though, is what they’d be willing to pay. On the good side, he has been very consistent over the last 5 seasons, hitting .314/.369/.530, averaging 28 home runs. He seems to be a good fielder, with a positive UZR over the last 7 seasons (he had some pretty bad numbers earlier on). He’s also 5th in WAR over all of Major League Baseball since 2009, and he’s the lefty power bat that the Nats would need if they said goodbye to LaRoche.

On the bad side, Cano is already going to be 31 next year, and he has unrealistic expectations about his contract. Even with a relatively quick decline, he should be very good for the next 2 or 3 years, but beyond that we just don’t know. He doesn’t walk, so the end might not be pretty. And that’s the issue, he wants his contract to last until a time that everyone presumes he will be bad. Other than that, he’d add so much to this team, and would certainly assuage any fears I have about how moving Zim to first might leave them with too many players below average at their position. If they could get him for a 4 or even 5 year deal, they have to think about it. Anything more than that would be very dangerous – the big question would be how many other teams feel the same way.

Kelly Johnson (2B) – Johnson can still be counted on to provide power at a position that doesn’t always see alot of homers. But his 18 HR average over the last 3 seasons doesn’t make up for his .226/.307/.395 line. He has a few strong seasons under his belt, and wherever he ends up, it’s possible that he does it again. But the last one was 4 years ago, and at 32, it’s not a very safe bet that he’d do it again. As a bench player, to strengthen this team when injuries come along, Johnson is the kind of guy that Nats should be going after. But as a starting second baseman, he doesn’t improve the team more than just letting LaRoche play.

Omar Infante (2B) – Infante had an incredible .318/.345/.450 season this year with Detroit but even looking at that line you can immediately see the weakness – he just doesn’t walk much. His career numbers aren’t that bad, though, but all in all, he’s a .279/.319/.402 career hitter, In the years that he’s hit close to or above .300, he’s been valuable, in the others, not so much. He would serve to downgrade the Nats offense if he replaced LaRoche as a starter.

Skip Schumaker (2B) – A versatile outfielder and 2B, UZR doesn’t look favorably on his ability to play the infield position. But he has the ability to get on base, which is nice to have. The problem is, he doesn’t have any power, so beyond an OBP between .330 and .340, he isn’t adding much to the equation. LaRoche can probably keep his OBP above the .330 mark, or very close to it, and he’ll do that while hitting over 15 HRs. This one just doesn’t work.

Stephen Drew (SS/2B) – Drew is a solid defensive SS but doesn’t have world beating range, it probably wouldn’t make sense to move Desmond and shake things up that much. As a 2B, he’d be an above average hitter but not an All Star. He’s a career .264/.329/.435 hitter, with 15 HR power, but except for the season, he hasn’t looked that good recently. He’s not a bad little player, and if he was home-grown, we’d probably be talking about how good he is. And above average is certainly good. For the right price, he wouldn’t be a bad fit, and he’d likely make the middle infield defense a bit better. As for the hitting, it might be a wash at best, and a repeat performance after leaving Fenway isn’t a safe bet.

Johnny Peralta (SS/2B) – Peralta has always been thought of as a hit-first shortstop, although he’s had some very good years recently according to UZR (to make up for some very bad ones in the past). At 32 next season, it would make sense for him to move to 2B if he came, and he could probably be quite good there defensively. As a hitter, he is still pretty good, hitting .278/.334/.438 the last three seasons. He’s a 15-20 HR guy, and he’s hit 30 doubles or more in 4 of his last 5 seasons. At his age, if he could be had for a shorter term deal, he probably helps improve both the offense and the defense, but not by a huge amount. He’s an intriguing option, and, other than Cano, may be the best free agent out there to fill the role.

Brendan Ryan (SS) – I debated even mentioning Ryan, but I’ll put him in here as food for thought. He can’t hit. If the Nats got him, they would be downgrading their offense. He’s a career .619 OPS guy, and only a little bit of that suckiness can be blamed on a few years in Safeco Field. Yet, he averaged a WAR of 2 from 2009-2012, thanks to his incredible fielding. His 2013 wasn’t so good, but he was still a very good fielder. He’s so good, Baseball Prospectus wrote an article titled “The Defensive Brilliance of Brendan Ryan” (and it’s free!) If the Nats did go after him, Desmond would have to move to 2B, or Ryan’s defensive prowess would be totally wasted. The defense would certainly improve, the pitching numbers would be better… but the hitting would have a black hole in the lineup after the seven spot. I have my doubts of my ability to tolerate watching him hit all year, but, man, that defense. 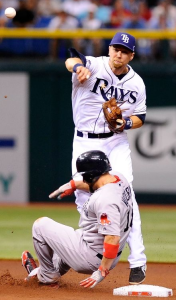 Ben Zobrist (2B) – Zobrist has a club option for 2014 of $7 M, and another option for 2015 for $7.5 M. The buyout is $2.5 M in 2014 and $0.5 M in 2015, meaning if they let him go this year they’d save $4 M, which makes keeping him a no brainer. But that doesn’t mean they couldn’t trade him. With Tim Beckham finally starting to live up to his potential in AAA this year, and Yunel Escobar on the roster but cheaper than Zobrist, it wouldn’t be crazy to part with Ben. After coming of his worst year since 2010, Zobrist still managed a .756 OPS, so he can certainly hit. He’ll never be an AVG guy, and his last three seasons combined at .271/.361/.447 might be an overestimation of what he’ll do, he’s still a very good hitter for his position. 15-20 HRs is probably a realistic expectation, as is an OBP over .350. He’d be an upgrade to the offense over LaRoche, but the Rays may not be ready to get rid of him just yet.

Jose Reyes (SS/2B) – I don’t think the Blue Jays are looking to trade Reyes, but their payroll was 42% higher last year than in 2012, and all they got to show for it were these “Last Place” t-shirts. They’re stuck with some big contracts, but if they can figure out a way to start dumping, Reyes is still owed $82 M through 2017, until he has a potential buyout in 2018. It’s the biggest contract on the team, although not the ugliest, and a trade which included another contract (like Buerhle’s) might garner some interest. If the Nats could get him, they get a guy who only played 2/3 of the season, but hit .296/.353/.427 , with 15 SBs. It’s the second year in a row he’d had a .780 OPS, he’s got decent power, and he’s only had an OBP below .347 once in the last 8 seasons. He’s also had some serious injuries, cutting short his 2013, his 2009, and limiting his 2011 and 2012 to around 600 PAs despite hitting leadoff. A move to 2B would make sense, as his fielding has been below average for the last few season. A healthy Reyes makes this team better offensively, but being tied to him until 2017, when he’ll turn 34, almost guarantees you’d see some unhealthy Reyes. It would be a high risk/reward move, but would certainly be very interesting.

Howie Kendrick (2B) – Between some of the other contracts, and with young Taylor Lindsay hitting well in AA this year, the Angels could certainly move Kendrick to save some money if they wanted to and probably get away with it. Kendrick’s owed about $19 M over the next two seasons, and by the end of the contract he’ll be 31. As a hitter, he’s been pretty strong for a 2B, hitting right around .290 with a .330-ish OBP over the last three seasons. His power has been up and down, over the course of those 3 years, he slugged .434. He steals a few bases, between 10 and 20 is a solid expectation, and he’s a very good defensive second baseman. He probably sacrifices a bit of offense compared with LaRoche, but the defense gets an upgrade.

Today’s middle infielder’s don’t hit like they used to. So even though LaRoche was a bad hitting 1B, there aren’t many 2Bs that might be available that are significantly better. The free agent class has one really good player in Cano, who will be incredibly expensive. I also can afford to be cavalier about some options such as moving Ian Desmond from SS to 2B if they were to get someone better. I am not sure if the Nats can afford to do that with a guy considered a team leader.

The question the Nats have to ask themselves, if they decide to move Zim to 1B and Rendon to 3B, is whether or not they’re gonna get someone who can hit as well as LaRoche to play 2B. At first blush it seems like a no brainer, but the options are limited. If those limited options don’t work out, the Nats may be better off leaving LaRoche at 1B (even if it’s just in a platoon).