It’s June 18th, and it’s hard to believe that the Nats are where they are. Sitting just under .500 with less than 100 games to go, they aren’t 100% healthy, but they are way less than 100% good right now. Despite the difficulties Dan Haren has had all season, he pitched well enough that the Nats should have been able to win.

Instead, the same story came through, not enough runs. And sure, every time you lose, there aren’t enough runs. I’m not going to dwell on last night’s game, that’s not what I do here. There are plenty of great reporters who are at every game, have access to the players and can give you daily reports. But I will say that last night was typical in that, even though they scored 4 runs, which is a fine outing, they looked like they couldn’t score at all against John Lannan. Again, a starting pitcher without much pedigree (despite his great history with the Nats) came in and shut them down. 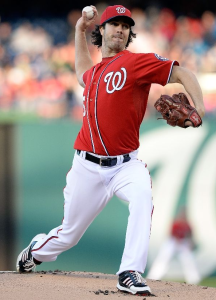 It’s easy to point to Dan Haren and say things like “if he’s on the team bus when they get back to DC, fire Rizzo”, but that just isn’t the problem. MASN showed the stat last night – the Nats have the second most games where their pitchers have given up 2 runs or less in the league. Second most, behind St Louis. It’s 29 games by the way. But they’re 20-9 in those games. Teams aint gonna win every one of those games, but probably should win more than 2/3 of them.

Why don’t they have a better record in those games? Because they are a putrid 7-9 in games that they give up 2 runs. THEY HAVE A LOSING RECORD THERE. On the other side, when they score more than 5 runs they are 25-1. All this points to their record having very little to do with Haren, or pitching in general, compared to their hitting.

It’s all a bit unbelievable, and hard to imagine it will continue to infinity because of who is on the roster. Anthony Rendon has hit the cover off the ball. Ian Desmond has very good numbers – his .286/.325/.478 gives him the third best OPS among NL shortstops. Ryan Zimmerman is also hitting great, and not just since he came back. His OPS is only behind Wright among NL 3Bs. Yeah, the Nats have the 2nd best 3B, 3rd best SS and, in a very short period of time, a great hitting 2B.

And there are guys who aren’t hitting but probably will. Denard Span gets on base, but he hasn’t this year. Adam LaRoche was awful in April, great in May, but has stunk up June. Jayson Werth hasn’t really hit this year, although since his return his .784 OPS (including a .340 OBP) doesn’t seem to be part of the problem. Kurt Suzuki is probably the only one in the current lineup, other than the bench players that combine to play the outfield, who I expect to hit poorly.

The unbelievability for me isn’t that they’re not scoring, it’s just that they can’t be this bad. The guys on the team, when you look at the numbers they put up, should be enough to be at least a middle of the road offense. It’s not the 1927 Yankees, but this is a bunch of guys who can hit (again, other than the current C/LF situation).

Throw in Bryce Harper and Wilson Ramos and you fix your biggest holes, and have the makings of a strong lineup. But Harper’s timetable is unclear, and Ramos has yet to prove he can stay healthy for an extended period of time. With them, this lineup can be dangerous all the way down through the 8th spot. But the injuries just aren’t enough of an explanation for the poor offense. Without Harper and Ramos, it’s still got the talent to score enough runs to do what they did last year – outpitch almost everyone while hitting enough to win games.

There are signs of life, though. The last 9 games, with the addition of Rendon over the 2B black hole, and the return of Werth, they’re scoring enough runs (averaging 4.11 R/G) to be almost exactly middle of the pack. That’s such a small sample, though, we just don’t know if it’s for real. Over the whole month of June, they are only slightly better than their season rank, it would put them right around the 10th best offense on the year. Again, it’s slightly better (and again, with more Rendon and Werth and less Espinosa, it shouldn’t be shocking), but who knows what they’ll be doing from here on out.

The problem is, it’s already the middle of June. So while we wait for Harper’s knee and Ramos’ hamstring to cooperate, for Span’s timing to return, for LaRoche to turn on his summer and for the rest of the guys who are actually hitting to do it together rather than scattered through the game, you have to wonder how long will we have to wait? Or, is this it? Will we just spend all year talking about how they are really better than this?

For your viewing pleasure, this was on another channel last night as Haren was pitching, and it seemed appropriate to me:

And while I’m positing videos, if you don’t get the feature image on the front page, it’s the cover of the album Is This It? by the Strokes: