Is the Front Finally Back?

The West Coast swing wasn’t exactly kind to the Nats, they only took 1 out of 3 series, they blew a couple of games in the 9th, and someone ran into a wall. But one thing good that happened over the week was that the starting pitching seemed to settle in. Really, we’re talking about the front of the rotation, Gio and Strasburg, since the 3 and 4 guys have been great all year. But for the first time all year, their top 4 starters are above the dreaded 100 mark in ERA+ (not really dreaded, it’s exactly league average, something you’d prefer your starters to be able to top).

Jordan Zimmermann and Ross Detwiler have been pretty much spectacular all season. Detwiler is hurt, but isn’t expected to be out very long. What was presumed to be the biggest strength of this team was the depth of the rotation, with those 2 being better than their #3 and #4 labels (so far so good), and the front end, and killer tandem at #1 and #2 (so far, not so good).

Strasburg has pitched well in his last two starts – and in his last 3 he’s only given up 2 ER. But the last two, despite some issues early on in the game, he’s looked like a real ace pitcher, even though he hasn’t always had his ace stuff. Either way, going 8 IP/1 ER followed up by 7 IP/1 ER is exactly what you’d like to see from your #1.

Those starts brought his ERA down to 2.66, which is, by the way, good enough for 11th best in the NL. So all this talk of his demise is probably a bit premature. He hasn’t always been spectacular this year, and he’s been a struggle to watch at times as he struggles to put guys away. But pitch counts, attempting to paint corners aside, difficulty with unearned runs, and all the rest aside, he’s still got one of the lowest ERAs in the league. 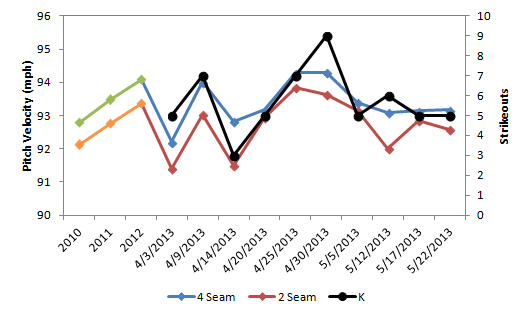 The K/9 isn’t the Gio that we’ve seen in the past, but his velocity is still pretty high and he’s got such good stuff that it may not matter. The big issue with Gio will continue to be walks, though. The high number of strikeouts helped bail him out of giving up way too many walks. In the month of May he’s averaged 2 BB per game and 5 K per game, which is certainly a sustainable ratio. His K/9 in that time has been 7, which isn’t bad, but it’s not that mark of a strikeout pitcher.

It’s unclear whether this is a “new” Gio or just long blip in a pattern. But he is pitching well, for an entire month, and that’s really what matters right now.

On an individual basis, both Gio and Strasburg are starting to look like the front line pitchers everyone thought they were. Gio still has some work to do to get back to where he was last year. And while getting back to where he was in terms of being a Cy Young candidate may not be realistic, you’d love to see him get a few more Ks. Maybe those will come, maybe not. Either way, he’s not far behind Strasburg in rehabbing his poor reputation earned in April.

The improvement of these two pitchers is probably an example of them consciously working to fix issues, but it’s also likely an example of regression to the mean, in a positive sense. Just like when we see that James Loney is batting .350 and figure it won’t last, when Gio Gonzalez has an ERA of 5.34 at the end of April, we figure that won’t last either.

With these two guys looking like they are on their way back to being frontline pitchers, the Nats chances of winning games and series becomes significantly better. This is a team that, when healthy and playing their best, has many strengths. But nothing is stronger than their starting rotation, and it’s good to see it coming together like it’s supposed to do.