The Nats aren’t exactly lighting up the scoreboard these days. They’re ranked 8th in runs scored, 8th in OBP and 6th in OPS, putting them in the middle of the pack there. Their power is certainly present, as they’re in 3rd place in HRs (almost a third of them are from Harper, but even without him they wouldn’t exactly be hurting for power).

This isn’t the 1927 Yankees, but neither was last year’s team. They finished 5th in runs scored in 2012, but that was thanks to a late run. Most of last year they spent their time in the middle of the pack on offense, especially early in the year. In other words, right where they are now.

The pitching, however, carried this team early on in 2013. Finishing first in ERA, 2nd in runs allowed, and 3rd in strikeouts, the pitching staff was really what brought them to their 98 wins. And this year, it’s just not delivering yet. 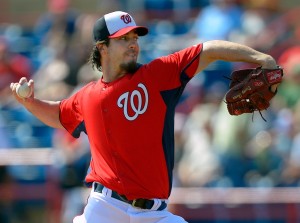 As of today, the Nats are ranked 12th in the NL in runs allowed, 10th in ERA, and 8th in strikeouts. This is in no small part to the bullpen, but the individuals in the bullpen have pitched so few innings, and it’s baseball so it’s really hard to ascribe issue the to entire bullpen.

The blame for the poor performance really falls on the shoulders of three players – Stephen Strasburg, Gio Gonzalez and Dan Haren. This is good news and bad news. It’s bad news because two of these guys are supposed to be their best players, good news because they still are.

First of all, Strasburg is hard to really crucify here. Despite a 1-3 record, he’s got a 2.96 ERA. He’s been bitten by errors, his RA is 4.48, but he’s young and he should learn how to work around disappointments like that. If his ERA stays the same, he could be an All Star. He’s just gotta get a bit luckier, so that he can stay in games longer and contribute more.

Gio, on the other hand, has been bad on his own. His 5.85 ERA is ugly, and he has no Unearned Runs to blame for any issues. His fastball velocity has been down in 3 of his 4 starts – only by 1 mph but down nonetheless. Whether this is what’s affecting him, or if it is symptom of some sort of injury, Gio doesn’t look great. But he looked decent in his first two starts, and he should improve, unless he really is hurt, of which there is absolutely no indication. At this point, it’s just two bad starts, amplified because it’s in April so he doesn’t have a season’s worth of stats to pull down his ERA.

Dan Haren is the exception to this group. There is no reason to suspect that he will get better than he has been. It’s hard to say whether or not he will finish as a good enough fifth starter. His first game was a disaster, but even in the three games since his ERA has been a 5.65. That doesn’t look as bad, but it’s still not good enough.

To put it simply: their pitching has been unexpectedly bad while their hitting is just a little bit off. If this team wants to pull themselves out of third place in the NL East, 3 1/2 games out of first place with only 143 games left, they gotta start pitching better.

Whether or not Haren can improve will be a big part of the Nats success. But it is small in comparison to Gio and Strasburg. And thankfully, both of those guys should end up with strong numbers. It’s just hard to watch them struggle early when the numbers can really jump out at you.