If you missed it, last time we ranked the NL East teams by position players. Methodology for this little exercise is written there. After examining the position players, here’s where we stand coming into the pitching round of the competition:

Now, we’ve got to look at the pitchers, and this always leads to at least a bit of difficulty. That’s because nobody actually lays out their pitching staff in order of #1 through #5 starters. Even the Opening Day starter for teams isn’t necessarily the team’s ace, although it usually is. So, I tried to approximate everyone’s spot in the rotation. 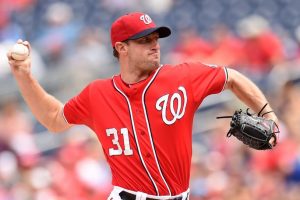 These are the aces of the teams, and Scherzer is the one who can Tear It Off in every single start. Syndergaard can do the same, and could finish the season with better numbers, but he still has to show he can stay healthy. Nola and Teheran are both solid starters, but if you’re in the “small ace” camp that thinks there might be less than 20 in the league, they don’t fit the bill. Straily isn’t even in the class of those two, and his placement as #1 demonstrates that the Marlins are in for it in the pitchers ranking.

This is similar to the previous category – deGrom and Strasburg are both the class of the group. And even if one of them has an off year, barring major injury, neither would sink Like a Stone in this ranking, considering the competition. Both could be the best pitcher in baseball if they are healthy now. Strasburg, though, was better last year, they had the same bWAR the year before, so I think Stras gets the slight edge. Arrieta needs to get himself back to what he was, and if he does that, he’ll compete for the top spot. But unlike the other two, his numbers last season call his effectiveness into question. Foltynewicz isn’t great, but he’s better than Urena right now.

Last year, I ranked Harvey as the best #3 starter, that was a big miss. I didn’t even put Gio as the Nats #3 guy, I put him in the middle of the #4 section, another miss. Gio was great last year, Harvey was awful. But Harvey has looked good, and healthy, this spring, and Gio could regress. I’m betting that Harvey is surprisingly good once again, even if he isn’t 2013 Matt Harvey. And Gio could also Slither right by Harvey to the top of this list if he turns in a repeat of 2017. Valasquez is inconsistent but shows flashes of dominance. The other two are serviceable starters, but most teams wouldn’t want them as their third best in the rotation.

Proving that prospect ranking can just be a River of Deceit, Roark was an unheralded prospect who has already had two great seasons, although 2017 was not one of them. Matz was a highly regarded prospect who, a couple of years ago, spent at least part of the season in legitimate rookie of the year contention. But injuries have limited him, and he has yet to have a great season. Eickhoff overperformed his peripherals in 2016 and underperformed them in 2017 – he’s somewhere in the middle as a pretty good #4, which ranks him well below what Roark and Matz can be. McCarthy has had some struggles in the past but hasn’t been terrible, and could be a really solid starter. Conley was pretty good his first two seasons, and really bad last year.

The Mets might have the highest ceiling in all of baseball in terms of 5th starters. And the Nats have a solid collection of starters, before we even mention the eventual return of Joe Ross later in the summer. Someone who would be able to start on almost any team besides these two is going hungry this year, but that’s because they’ve all got some flaws. If Wheeler stays healthy he might be great, although he’s had a rough start to the year. Vargas can eat innings, Fedde is a well-regarded prospect… Hellickson is 5th starter most teams would be happy with, and will probably be up once he’s stretched out. Unless Cole really shows something, although he is a bigger question mark. The other teams don’t have much here, although Gohara is young and could be pretty good if he gets healthy enough.

When a team has a closer that isn’t successful, it seems hard to Carry On through the innings leading up to it, never knowing if all their success is going to be blown up at the last second. What that too much of a stretch? Sorry, I had to get CSNY in here. Anyway, this was a tough one for me. Familia was hurt last season, but he has been the best of the bunch. Doolittle has a history of being better than Vizcaino, who can hit triple digits and was great last year. And I think Doolittle is the better closer, but Doolittle also has some recent injury history. If he can stay healthy all season he might rank second or first. Hector Neris was a bit more hittable in 2017 than he was in 2016, but he was still really good. Ziegler isn’t what he used to be, Barraclough may end up with the role, if he doesn’t get traded first.

It appears that the Nats have this one going away. Last year, it was a bit closer between the Nats and the Mets. Some of that difference now is the health and success of the Nats lineup last season, and some of that is the lack of health of the Mets pitching. But if you think the Nats can’t fall behind with an injured roster, and the Mets can’t step up with a dominant pitching staff if they stay healthy, you’re not paying attention.

Atlanta and Philadelphia both appear to still be far enough behind the other two to not be a major threat. Yeah, if the Mets aren’t healthy they may fall closer to that pack, and one of the other two could pass them for a Wild Card if everything goes right, but neither of the two look like real contenders for the division. The Marlins have taken a team that was probably going to be third on this list, and could’ve contended for second with a few pitching acquisitions, and turned it into what is easily the worst team in the division.

So there you have it, the Nats have it won. Unless, you know, they play the games for real. Then I guess we’ll just have to see what happens.

And now… since all else has been done and said, it’s time for Mr Oysterhead!