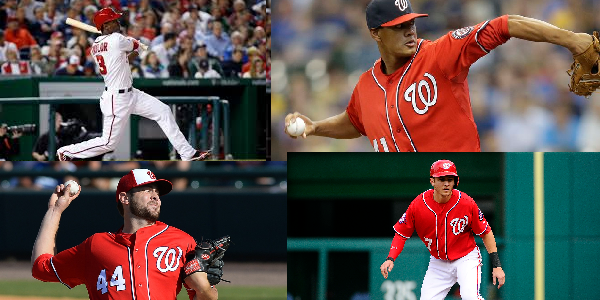 Last year there was quite a bit of talk about how the Nationals “window” was closing, because Jordan Zimmermann and Ian Desmond were leaving, along with a few others. But I never bought into that, and while it’s early, the Nats certainly look like a team that can succeed with its current roster. Sure, they aren’t consensus World Series favorites anymore, but where did that ever get them?

Some sort of window didn’t close on them last season just because they lost a few key contributors. They are still a solid team, and while it certainly seemed like they had a great chance with the personnel they had in place last season, losing guys to free agency doesn’t significantly change their outlook. There will always be transitions, of course – Stephen Strasburg is the next player that will likely bid this team farewell in the offseason.

The Nats still look pretty good, but good teams are one thing. Good franchises, on the other hand, need to be in a constant state of renewal. Prospects help that renewal, and there is excitement with Lucas Giolito and Trea Turner perhaps joining the team this year.

There are also promising young major leaguers. Michael Taylor isn’t going to be Spring Training 2016 Michael Taylor, but he has the potential to be a very good player. And, of course, Joe Ross has looked very impressive so far. To think that Mike Rizzo got Turner and Ross for Stephen Souza… well, in time for the upcoming Passover holiday, I’ll just say even if Rizzo had only gotten Ross, it would have been enough. Dayenu.

No, the window isn’t closing on this team’s talent, or ability to win games and compete with the very best of the division and the league, not if they keep refreshing and renewing. But, unfortunately, therein lies a word that brings to mind another window that might be harder to spot. And that word is “division”.

So far, the Nats have preyed upon the dregs of the National League, which also happen to sit right here with all of us in the NL East. The Marlins are not nearly as bad as the Phillies or the Braves, but I think the division remains a two team race. It’s a pretty good place for the Nats to be, but this status quo cannot last forever.

After about a half decade of ineptitude from the Phillies, they cleaned house and started a real rebuild process. The Braves took less time to realize it was time to start over, with only two years of being really bad before entering a true rebuild.

But what both teams have done is impressive so far, trading for prospects and getting rid of players who aren’t right for a rebuilding team. According to Baseball Prospectus, the Phillies have six of the top 101 prospects. The Braves have seven. Their prospect organizational rankings put the Braves #2 overall and the Phillies #4. And that doesn’t include guys that are performing now in the majors like Vincent Valsquez, Maikel Franco and Arodys Vizcaino.These teams should both have bright futures.

Rebuilding takes time, and not every prospect works out. But fans of Atlanta and Philadelphia should be very happy with the current path their teams are taking. It’s not dissimilar to the journey the Nats embarked on a few years ago, and this path made Washington a first division team.

The Nats have a short window, but it’s not about their own talent, it’s about taking advantage of the lack of talent in their weak division. It won’t get any easier to walk all over this division than it is this year, and maybe next year. Then it should get tougher, so the players and the manager have to take advantage of this open window before it closes on them.

The front office’s challenge, on the other hand, is to keep the Nats relevant and good, and make sure there are no talent-based windows that close. They should work to make sure the Nats are always competitive, and don’t need to go through those kinds of rebuilds. The window of a weak division will probably close in the next few years, but that window of a team that can contend for a title doesn’t ever have to, if they do things right.