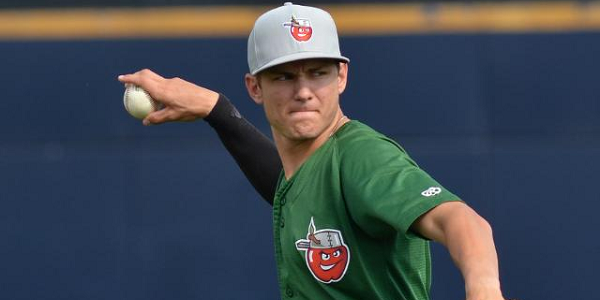 Nats made a pretty impressive move this afternoon, trading away Steven Souza and minor leaguer Travis Ott for some prospects. It looks like a great deal for the Nats, and starting with the guy’s they got, here’s why:

Trea Turner is the centerpiece of the deal, as he was the Padres first round pick this year. He technically can’t be traded until a year after he signs, or plays pro ball, or something, which means he’s a Player to be Named Later. We’ll get to that in a minute, first let’s talk about the player. 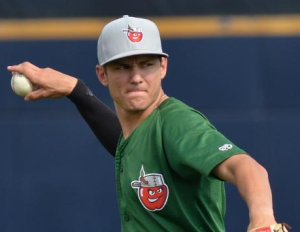 The 13th overall pick in 2014, he was ranked 18th going in to the draft this year by Keith Law, who said “Turner had a miserable start to the year but finished as strongly as anyone in the draft, showing surprising power and playing better defense at short.” He was great in college at NC State, and came out with a reputation as a guy who makes a ton of contact and doesn’t strike out much.

More valuable than his bat, though, is his position and his speed. A good glove with some range and an “average — but accurate — arm”, he looks like he’ll stay at shortstop, although there’s still some doubt. Meanwhile, he’s graded at an 80 speed, which is the max. He has all of the speed.

Since he was drafted this year, he hasn’t had much time in the minors. He started out with 105 PAs at class-A short season, where he hit .228/.324/.283, before finishing the season up at low-A. In 216 PAs there, he hit an impressive .369/.447/.529, showcasing more power than most probably envisioned. He may start 2015 in Low-A, as soon as he’s allowed, but they might try him out in High-A instead, and he’s probably closer to the majors than you might think considering he just got drafted.

He stole 23 bases in his 321 PAs, and only was caught 4 times. SBs in the minors must be looked at with a raised eyebrow, but what he’s demonstrated so far looks very good.

As for the scouting, Jeff Sanders, who covers the Padres for the San Diego Union Tribune, named him as their #3 prospect this October, noting that he showed some surprising pop after being promoted to Low-A.

CJ Wittman from Baseball Prospectus really liked him, and thinks they got their shortstop of the future.

He was scouted this spring by Ryan Sullivan of natsgm.com, so check out the link below

I scouted Trea Turner in person this season – Here was my write-up:http://t.co/Kp21oDK1FO pic.twitter.com/jf8D7VIB61

The biggest knock on him from various sources is that his swing can get a little long. He’s not destined for hitting greatness, although his speed and his past ability to make contact suggests he could really hit well, especially for his position. Just don’t expect the second coming of Cal Ripken here. That doesn’t mean he’s not a future All Star, though.

As for actually playing… he can’t do that for the Nats right now, which is why he’s a PTBNL. They have to wait a year after the draft to trade him. But when that date rolls around, it will still be within the window of how long a PTBNL can be unnamed. A little odd, but so be it. As for what they do with him, I wondered that as well. Here was an answer that made sense to me

Extended spring training certainly beats the i. Edit: Maybe the idea wasn’t so idiotic, as Dave Cameron suggests he will indeed have to remain with the Padres organization. But still, it’s unfortunate, because it’s not the same thing as going to Hagerstown or Potomac. He’ll get a half a season of real minor league baseball this year, which may slow his development a bit.

The other guy in the deal is no throw-in, Joe Ross can throw. He’s a RHP with a mid-90s fastball, and he’s 21 years old. He just finished his third full season in the Padres system, and he’s looked better each year. This year, spending the vast majority of his time in low-A, with a brief stint in high-A, he amassed a 3.92 ERA. He stuck out 106 in 121 2/3 IP, while only walking 29, both big improvements from last year. His K/9 is a bit low for a guy with his frame and velocity, but he still profiles well according to the scouting reports.

If you’re not gonna strike out a ton, you can still be good, especially if you induce grounders. And Keith Law says he does just that, writing, “He gets ground balls more than he misses bats, but has enough stuff to do both and profile as at least a good No. 3 starter, perhaps even a No. 2 starter. ”

Chris Rodriguez of Baseball Prospectus scouted Ross in May and July this year. He liked his fastball, which was in the mid-90s but topped out at 97, and sat 95 from the stretch. He also saw some potential in his slider. But the fastball has the fun quotes attributed to it, like “tough to square”, “good control”, and “some deception.” As for Ross overall, Rodriguez also had some good things to say:

I like his body which is built for the long haul and the stuff maintained through his latest start…Overall, the secondary pitches aren’t huge weapons now, but show good feel/projection to work at the highest level. I like the outlook. #3 starter if it all clicks.

CJ Wittmann likes the FB and the slider, and like Law, sees him as possibly even more than a #3:

We’ll probably have a better idea at the end of this year whether Ross can develop into a full time starter – if not, he’s probably got back-of-the-bullpen stuff, which is pretty nice to have coming up from the minors in a couple of years, too.

At 25, he’s not young for the minors, but he has produced. He’s a potentially very good player ready for the majors, although I kind of envision him as a guy with a lower OBP to go with a good amount of power and speed. Not a star, maybe a second division starter. The Nats have so much OF talent, and are jammed up in the corners for the foreseeable future, so he really had nowhere to go. It should just be a question of whether you think they got enough for him, not whether they should have dealt him.

Of course, he’ll be remembered forever here for his no-hitter saving catch on the last day of 2014, and the fanbase will be forever grateful. He could be a good player, but it was never going to be here anyway, so I’m happy he gets a chance somewhere else. I’ll just leave this here:

The other guy the Nats gave up was Travis Ott – a left-handed slugger with a serious leg kick… no, wait, that’s Mel Ott. Travis is a lefty pitcher, a 25th round pick, his fastball tops out in the low-90s. He’s only 19 so if he can develop a little more heat on the fastball, he’s got a shot. He looked good in Short Season class-A, but struggled mightily in his very limited time at low-A. He could be something, but as of now, he’s not a real prospect.

The Other Piece – #1 Ian Desmond

One person that is affected by this whole deal is Ian Desmond. If the Nats just picked up their future shortstop, where does this leave him? Before we go there, I’d advise a little caution. The Nats made a great trade, and they’d be foolish to say no. They added at a position of weakness in the organization, and got a very good prospect.

But they didn’t trade for a starting MLB SS, at least not a guy who is one right now. Certainly it makes it easier to lose Desi, but at this point, there isn’t even agreement that Turner is really a SS. I don’t know if this affects what they do with Desmond right now, but they’ll spend 2015 trying to decide if Turner is truly their future SS. And if he is, he might not be ready til 2017 or even 2018 (when he’ll be 24 and 25 years old).

This does give them flexibility with Desmond in the future, but it neither guarantees he’s gone or he’s here for 2015 or beyond. And it doesn’t consign Wilmer Difo to 2B, either. Its nice to have multiple prospects at a position. The Nats got a good prospect because they could, not because they had to. It’s just great that they were able to fill a position of need for their system.

The Other Piece – #2 Jordan Zimmermann

In the immediate-term, I actually think this affects Jordan Zimmermann more than Desmond. I was never convinced Desmond was going anywhere in 2015, because he’d be so hard to replace. But their pitching staff is so strong they would probably still win the East without JZimm. He seemed the most likely to be moved in order to help them build for the future.

But with this move, they added two first round picks. It allows them to keep JZimm, at least for another season, and not feel like they haven’t addressed the future. Yes, this will affect Desmond’s status down the road more, but for right now, I’d be very surprised if JZimm went anywhere, and if he does, after this haul, I think the bar is set high for what they want in return.

It’s hard not to call the Nats winners in this deal. Obviously the guys they got are not MLB players yet, and have to still succeed in the minors. But, there seems to be widespread agreement that they did they best in this. Keith Law said “The Nationals seem to make out particularly well here, trading a quality minor leaguer who doesn’t fit on their major league roster for two very good prospects who should help them in the long term.”

That being said, there’s a good chance you’ll see success from Souza soon, and these guys are a couple of years away. But in the end, the Nats got the better players. Before leaving you with some Twitter action from MLB writers and scouts and writer-scouts on how this was received, I’ll just leave this quote from Ken Rosenthal’s article on the deal:

“I think the Nats must have pics on TB and SD!!” one exec said. “They are the clear winner. Not even close.”

From an NL scout on now former #Padres prospect Trea Turner: "Turner for me was one of the easiest everyday SS grades I've ever written."

Great return for Nats on the mega-deal. I prefer both Turner and Ross to Souza

Nationals getting two first-rounders in Joe Ross and Trea Turner (PTBN) for only Steven Souza is unreal. Rizzo is a G(enius).