Have the Nats Arrived? Ask Me in 13
The Nationals Review Podcast Episode 32

Chances are, you’ve heard of a few of the big name players in AAA Syracuse right now. Steven Souza has been crushing AAA pitching, hitting .371/.475/.583 in 191 PAs, and was called out in last night’s Nats broadcast. He should probably be the next guy up, especially considering how poorly Kevin Frandsen has played. And I recently wrote about the incredible season that Destin Hood is having, with his .317/.368/.504 line. 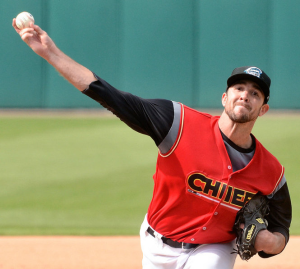 You may not have hear of Taylor Hill, but he’s heard of you. Just kidding, he hasn’t

As for the pitching prospects, Taylor Jordan has been pretty good since being sent down, with the exception of one really bad start. But another Taylor is quietly putting together quite a start to his season, and you may not have heard of him. Taylor Hill, now 25, is a Vanderbilt product who is now in his fourth season with the team.

Hill didn’t play much in 2011, after graduating, and 2012 wasn’t anything special. But last year, he moved quickly through the system, starting at high-A Potomac for 14 starts, moving to AA Harrisburg for 11 starts, before starting 2 games in Syracuse. In that time he threw 164 2/3 innings, and he struck out 104 guys but only walked 29 while finsihing with a 2.95 ERA.

He’s also acted like he fits in with the Nats rotation – on May 4 he pitched a complete game shutout, and in 5 of his last 10 starts he’s only walked one batter. In the other 5, he hasn’t walked any.

He is a groundball pitcher, which is helping him do so well. It also makes him a little more of a prospect – if he didn’t strike out anyone and couldn’t induce grounders, they’d probably be terrified to bring him up to the majors no matter how good his numbers looked. But he does have that groundball ability. If there’s someone that comes to mind in recent years that has a similar profile it’s Tommy Milone, who is, right now, a league-average starter with the A’s.

Kevin Goldstein wrote about him way back in January of 2012 for his Nats prospect list, naming him as his sleeper pick for the system. He said “2011 sixth-round pick Taylor Hill combines a big body with average stuff and extreme command and control. He could move quickly, although his ceiling is limited.”

Other scouting reports are similar – they like his control but disparage his “stuff” a bit. So he doesn’t seem to be in line to be even a #3 type starter. And quite frankly there just isn’t much out there about him – not a ton of glowing scouting reports, Baseball Prospectus only has that one single mention of him – which should tell you what kind of prospect they think he is.

But that doesn’t mean it would be unrealistic to see envision him as a successful pitcher in the majors. Whether it’s as a back end of the rotation, or a useful bullpen piece, there is no reason to believe Hill can’t get outs at the big league level. And with the way he’s pitching right now, the Nats will be interested in giving him a chance, if the opportunity ever presents itself.

2 thoughts on “The Other Triple A Taylor”